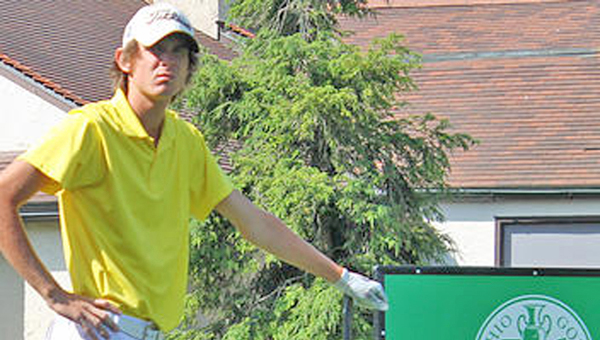 Nathan Kerns has had a life-long love affair with golf. He finally felt it was time to pop the question.

The answer was “yes.”

Kerns plans to turn that love affair into a “marriage” after joining the ranks of the professional golfers.

Kerns has joined the National Golf Association Tour — formerly known as the NGA Hooters Tour — and will begin his professional career at the NeSmith Chevrolet Classic April 15-17 at Longs, S.C.

There are a total of 15 tour events on consecutive weekends concluding Sept. 10-12, also in Longs, S.C.

“It was the same with Division I golf. It was always in the back of your head. I always want to play it and by my junior and senior year of high school I was working to make it happen,” said Kerns.

“It was the same thing with going pro. When I won Ohio Amateur between my junior and senior years of college, I continued to work hard. I was going to get my degree, graduate and head to the professional route the following year.”

As a senior at Marshall University, Kerns rose to the No. 178 ranking by the R&A World Amateur golf rankings. He earned first team All-Conference USA honors, the first Herd played to accomplish the feat.

He was the individual runner-up at the 43rd annual Marshall Invitational and qualified for the NCAA Tournament as an at-large individual selection his senior year.

Kerns is aware of the large number of quality golfers that await on the professional level, but it is something that he plans to deal with just like in the past.

“There’s a lot of college guys I’ve seen before, and some guys I haven’t heard of. It’ll be a little different. But ultimately, you’re always playing the course,” said Kerns.

“All that stuff is in your preparation. If you play in any tournament outside your area, you’re always going to run into people who are pretty good. If you’re not on your game, they’ll beat you. If I hit shots and make putts, I feel I’ll be there. Everyone is on the same talent level. It’s whose on their game that week. You have to get used to it. It’s a grind.”

While Kerns exhibited the physical tools to play the game at a higher level at a young age, his father Jeff helped him with all phases of the game including the important mental aspects.

“It’s not a lot different at the pro level. It’s going to be a learning curve. I know that. Last year I had a 10-footer to make the cut at a tournament. It wasn’t for money. You always to prepare the same way. I’ll prepare to win each and every week,” said Kerns.

“I’ve been fortunate to have my dad. He’s played a big part in my game along with Tony Brown. To have dad there to teach me the game itself and the mental side of it has been huge. You can beat a lot of people mentally.”

Also on his resume includes the prestigious Ohio Amateur championship that he shares with such professional greats at Arnold Palmer, Ben Curtis and John Cook.

In high school, Kerns was a two-time Southeast District Player of the Year and played in the state tournament three of his four years, once with the Ironton Fighting Tigers’ team and twice as an individual qualifier.

He finished seventh overall in the Division II state tournament his senior year to earn second team All-Ohio honors. He finished 14th as a junior.

Kerns began playing when his father introduced him to the game at the age of 3. Jeff Kerns was an All-Ohio golfer for Ironton and was also his high school coach.

“I’ve been around the game all my life. As much as I love the game — and it’s a great game and it’s given us a lot of great times — it’s a cruel game a lot of times,” said the younger Kerns.

“If you’re playing really well, you try to win (the tournament). If you’re struggling and have a chance to make the cut, that’s the goal.”

Anyone interested in helping as a sponsor or making a donation may contact Nathan or Jeff Kerns at their home — 2320 South Sixth Street, Ironton, OH 45638, by calling Jeff at (740) 646-0770, or jhnmkerns@roadrunner.com, kerns.nathan@yahoo.com or pgawannabe@adelphia.net

BUFFALO, N.Y. (AP) — THE University of Dayton is to be reckoned with. Dyshawn Pierre scored 14 points and Jordan... read more