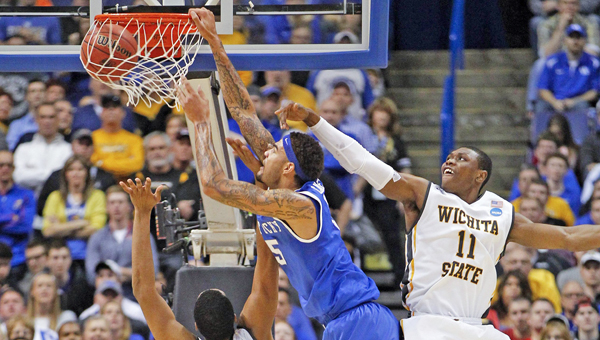 Julius Randle had 13 points and 10 rebounds, and James Young also had 13 points for the No. 8 seed Wildcats (26-10), who made a series of clutch free throws in the final minutes to hold off the top-seeded Shockers in arguably the most captivating game of a thrilling first weekend.

Kentucky will play in-state rival Louisville in the Sweet 16 on Friday in Indianapolis.

Cleanthony Early scored 31 points and Ron Baker had 20 for the Shockers (35-1), who hadn’t lost since last year’s Final Four.

RALEIGH, N.C. (AP) — Jarnell Stokes had 17 points and a career-high-tying 18 rebounds, and Tennessee denied Mercer a second straight upset in the NCAA tournament.

Josh Richardson had a career-high 26 points and Antonio Barton added 18 for the 11th-seeded Vols (24-12), who outrebounded Mercer 41-19 and kept the Southeastern Conference perfect in the tournament.

They joined Florida and Kentucky in the round of 16 — the first time three SEC teams made it that far since 2007.

Langston Hall had 15 points to lead the 14th-seeded Bears (27-9), who beat Duke in the signature upset of the tournament but couldn’t answer Tennessee’s size.

SAN ANTONIO (AP) — DeAndre Kane drove for the game-winning layup with 1.6 seconds left and No. 3 seed Iowa State advanced to the Sweet 16 for the first time since 2000.

The Cyclones (28-7) head to Madison Square Garden next week to face No. 7 seed Connecticut in the East Regional semifinals.

The Tar Heels (24-10) are gone in the NCAA tournament’s opening weekend for the first time in consecutive seasons under coach Roy Williams.

North Carolina’s Nate Britt raced the ball up court after Kane’s basket, but time expired before he could reach halfcourt and call a timeout. Officials huddled for several minutes reviewing clock replays before ruling the game was over.

North Carolina’s Nate Britt raced the ball up court after Kane’s basket, but time expired before he could reach halfcourt and call a timeout. Officials huddled for several minutes reviewing clock replays before ruling the game was over.

SAN ANTONIO (AP) — Isaiah Austin and Brady Heslip each scored 17 points and Baylor shut down Creighton’s Doug McDermott with suffocating defense, ending the career of the one of the most prolific scorers in college history with an 85-55 win Sunday night in the NCAA tournament West Regional.

Baylor’s size and speed overwhelmed the third-seeded Bluejays (27-8) and their national scoring leader, earning a third trip to the Sweet 16 since 2010.

McDermott, who averaged 27 points this season, finished with 15 but had just three in the first half as Baylor built a 20-point lead. McDermott ranks fifth on the NCAA career scoring list.

No. 6 seed Baylor (26-11) had five players score in double figures and shot 64 percent in one of the dominant performances of the NCAA tournament.

SAINT LOUIS (AP) — Dwight Powell had 15 points and seven rebounds and No. 10 seed Stanford wrapped up its second straight upset at the free throw line.

Chasson Randle added 13 points, six steals and four assists for the Cardinal (23-12), who advanced to the round of 16 for the first time since 2008 — also their last NCAA appearance. They beat No. 7 seed New Mexico on Friday.

Freshman Andrew Wiggins had just four points on 1-for-6 shooting with four turnovers in what could have been his final college game for Kansas (25-10).

Tarik Black had 18 points and six rebounds for the Jayhawks, but he fouled out with 5:25 to go. Conner Frankamp had 12 points on four 3-pointers, the last two in the final 23 seconds.

Frankamp missed a third 3-point attempt off the glass near the buzzer in a bid to tie it.

SAN DIEGO (AP) — Jordan Adams scored 19 points and UCLA reached the Sweet 16 of the NCAA tournament for the first time since 2008.

The fourth-seeded Bruins (28-8) will play Florida, the tournament’s overall top seed, in the South Regional semifinals on Thursday in Memphis. First-year coach Steve Alford has won as many NCAA tournament games in three days as the Bruins had in the previous five seasons combined.

Alford replaced Ben Howland, who was fired a year ago after the Bruins lost to Minnesota in their NCAA tournament opener. This is UCLA’s first trip to the regionals since Howland got the Bruins to their third straight Final Four in 2008.

Stephen F. Austin (32-3), the No. 12 seed, had its 29-game winning streak snapped. The Lumberjacks hadn’t lost in exactly four months.

Anthony Gill added 13 points for the Cavaliers (30-6), who turned in a dominating performance while controlling the tempo and shutting down the eighth-seeded Tigers (24-10) at nearly every turn.

Virginia led by 15 at halftime and pushed that to 27 points late, picking right up where it left off in its strong finish to Friday’s tournament-opening win against Coastal Carolina.

In what has already been the program’s most successful season in decades, Virginia added another milestone: its first regional semifinal appearance since making it to a regional final in 1995. And the Cavaliers, carrying a No. 1 seed for the first time since the days of Ralph Sampson, look ready to go even farther.

SAN DIEGO (AP) — Aaron Gordon and Rondae Hollis-Jefferson scored 18 points each, and Arizona looked every bit the No. 1 seed in the West while blowing out Gonzaga 84-61 on Sunday.

After four days of upsets and buzzer beaters, Arizona (32-4) closed out the NCAA tournament’s first weekend with a display of domination.

Arizona led by 21 in the first half and continued to work over Gonzaga to earn its third trip to the Sweet 16 in four years.

Up next for the Wildcats is a trip up the coast to Anaheim, where they’ll meet San Diego State, a team they beat in this same arena early in the season.

Chapman back in Reds’ training camp

Cincinnati Reds’ reliever Aroldis Chapman was back at the team’s spring training camp just four days after being hit in... read more