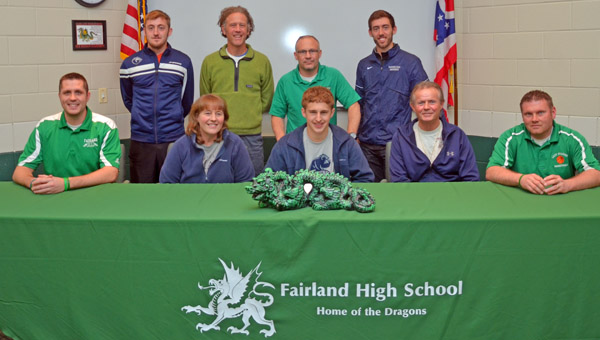 PROCTORVILLE — Chad McComas’ hopes of a great senior season in cross country were broken by a tibia stress fracture, but his dreams of running at the college level weren’t shattered.

After missing most of the cross country season with a stress fracture, the Fairland Dragons’ senior runner had already proven his skills enough to earn an athletic and academic scholarship with Shawnee State University.

The injury occurred in September while McComas was training and he tweeked something in the back of his knee.

“I started running with a limp and when I ran with a limp it put stress on my bones and it ended up causing the injury,” said McComas. “I ran two races and one was a scrimmage. I only had one really legit race. It was the most difficult thing I’ve went through.”

Fairland coach Chuck Wentz said that past experiences with Shawnee State and several former runners from the program now with the Bears were enough to convince coach Eric Putnam that McComas could run for his program.

“Since coach Putnam came up and started watching our runners, he’s really saw what our program is and really likes our low mileage. But there’s a lot of hard work going into it and he can build from where we’re at from where we leave off without a lot of injuries so that helps him look at us a lot more,” said Wentz.

“He’s seen Chad run since the sixth grade running in the Shawnee Bear Run and knowing the kind of miles Chad has run and the hard work he’s put in over the years kept Putnam faithful to Chad all the way through.”

McComas has been part of the Fairland cross country program for seven years and he was on the two state meet appearances by the Dragons.

“(Missing his senior year) was really the most difficult thing about it. My junior year I had letters from different colleges come in and all of a sudden your senior year seems like it’s all going up in smoke,” said McComas.

“But then my last race at OVC, I get a text from the assistant coach and he said they’d still like to have me. SO I was really grateful and blessed for that to happen.”

McComas entertained offers from other programs such as Marshall, Kentucky and Waynesburg, Pa., but decided to run at Shawnee State that has a history of signing Fairland distance runners.

“The coaching staff is really good. Also, old teammates that’s going to become present teammates, too, was attractive. And it was close to home,” said McComas who will be reunited with former teammates Joe and Ryan Stewart and Logan Rowe.

Not being able to run during the cross country season bothered McComas who doesn’t like to miss anything. He hasn’t missed a day of school since first grade and he doesn’t miss a day when it comes to his workouts.

“I’m not quite where I was in shape, but I am getting back in shape and I’m starting to notice improvements in my running. It’s coming along, but I’m not where I was,” said McComas who posted a best time of 16:45 his junior year.

Wentz has no doubts that McComas will be an asset to the program.

Chad is the son of Deanna and Randy Thompson.

Indians beat up on Reds, Simon

GOODYEAR, Ariz. (AP) — Ryan Raburn played the field for the first time since running into an outfield wall and... read more