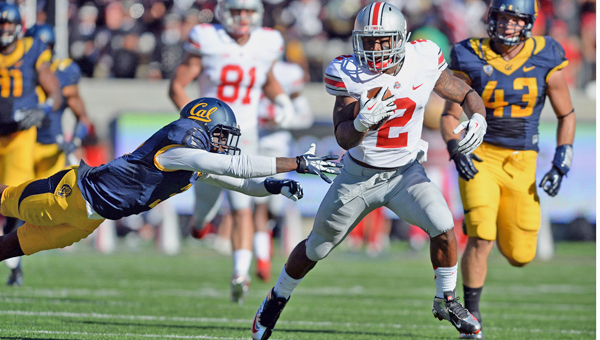 Ohio State’s Rod Smith (2) heads downfield against Cal in the first half at Memorial Stadium in Berkeley, Calif., last season. Smith is one of several candidates to fill Carlos Hyde’s running back position. (MCT Direct Photo)

All the senior did a year ago for the Buckeyes was rush for 1,521 yards and 15 touchdowns in just 11 games, becoming the first running back to top 1,000 yards in Urban Meyer’s 12 years as a head coach.

Although it might be hard finding someone to fill his spot, that doesn’t mean it won’t get done.

“Someone has to step up and fill the shoes of Carlos Hyde,” running backs coach Stan Drayton said after a recent spring practice. “If it takes more than one guy to do that, I promise you it’s going to get done.”

There are several candidates in Ohio State’s spring camp. Ezekiel Elliott, the leading returning rusher at running back with 262 yards on only 30 carries, would seem to have the inside track.

“I just think that I’m a very versatile back, I can do a lot of things,” said the sophomore, a prized recruit from St. Louis. “I can run to the outside, I can run a tight zone, I’m a great pass catcher out of the back field. I think I just bring a little versatility to the table.”

Elliott says he’s bulked up, gotten stronger and faster and knows the playbook far better than he did a year ago.

But there are still moments when he looks and acts like the youngster he is.

The other three possibilities in spring camp all have some baggage.

Rod Smith, a prototypical Ohio State big back at 6-foot-3 and 232 pounds, is a fifth-year senior who has had chances to play more but has never really grasped them. He did well at the outset of last year while Hyde was serving a three-game team suspension for a physical confrontation with a woman at a bar. But after Hyde became available, he seldom saw the field.

He has some skills to display this spring.

“Just that I can do everything that Carlos did: Break tackles, make the home-run plays, pass protection,” he said. “At the end of the day, be accountable, be a leader.”

Also in the conversation is third-year sophomore Bri’onte Dunne, an acclaimed recruit out of football hotbed Canton, Ohio, who dropped from hot commodity to just another contender for playing time. A year ago, he was redshirted.

Asked if he thinks he’s in the mix to start this fall, he said, “Oh, yeah. Of course. Everybody’s in the mix right now. There’s really no depth chart right now for the running backs. So everybody’s just going hard and trying to fight for the spot.”

Warren Ball, a former walk-on, is also getting carries, as is freshman Curtis Samuel, who graduated early from his high school in Brooklyn, N.Y., to play spring ball with the Buckeyes.

Dontre Wilson, who played well in limited action as a ball carrier as a freshman, is working out with the receivers group as an H-back, a hybrid between a wide-out and a running back.

Instead of one go-to guy like Hyde at the position, it just might end up being several backs, taking turns.

No matter the eventual starter, Drayton is adamant that the position is a high priority.

“I’m extremely confident that we’re going to get to where we need to be,” said Drayton. “They’re trying to be the hardest working unit on the football field and I really see them trying to do that. If they keep that mindset and keep that unselfishness in their back pocket somewhere, we’re definitely going to exceed our goals. I really believe that.”