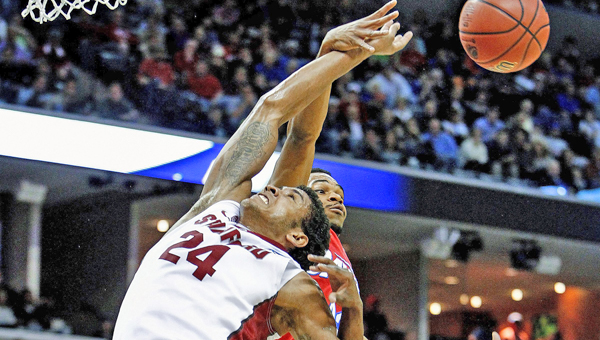 MEMPHIS, Tenn. (AP) — Like a red and blue blur, the Dayton Flyers were pressing and passing, shooting and scoring. The waves never seemed to stop coming, with 10, 11 and then 12 players giving them quality minutes.

An exhausted and foul-plagued Stanford simply couldn’t keep up.

The underdog Flyers — an 11 seed in this South Region — are now in the Elite Eight for the first time since 1984 after an emphatic 82-72 victory over Stanford on Thursday night.

“We had 11 guys score in the game and from top to bottom, we kept coming and coming,” Dayton coach Archie Miller said. “The way they shared the ball and moved the ball … it was a true team effort. It’s nice that on the biggest stage, we acted like ourselves.”

Jordan Sibert scored 18 points and freshman Kendall Pollard added a season-high 12, as Dayton (26-10) made sure this one wasn’t particularly close after slipping by in the first two rounds. The 6-foot-4 Sibert was spectacular, slashing to the basket and draining 3-pointers, to help the Flyers lead for almost the entire night.

Dayton showed its depth early, using a dozen players in the first half to wear down Stanford.

“They were relentless,” Stanford coach Johnny Dawkins said. “That’s the best way I can put it.”

Dwight Powell added 17 and Stefan Nastic — who fouled out with more than five minutes left — had 15.

Dayton, the last remaining of the six Atlantic 10 teams in the field of 68, plays Florida on Saturday for a trip to the Final Four. Florida beat UCLA 78-69.

Sibert finished 7 of 12 from the field, including 4 of 9 from 3-point range. He had plenty of help, including from Pollard, a 6-foot-6 guard who continually got to the basket and helped the Flyers stretch their lead in the first half.

“People have been doubting us and not giving us a lot of credit,” Sibert said. “I know these guys. I know what coach wants. We all want to win. At the end of the day we all want to be considered winners.”

Pollard was averaging two points per game, but Miller didn’t hesitate to give him big minutes once he got hot.

“This guy’s a big-time winner,” Miller said. “He’s not afraid of anything.”

They made just about everything they threw at the basket early. Scoochie Smith’s corner 3-pointer put the Flyers ahead 15-13 early and Stanford’s Powell — who averages nearly 14 points per game — was quickly banished to the bench with two fouls.

Foul trouble was an early theme, and a much bigger problem for Stanford.

The Cardinal rely on a six-man rotation. When the Flyers would lose a man to foul trouble, they simply replaced him with someone who was just as capable.

Things went from bad to worse for Stanford late in the first half. The Cardinal fell behind by double-digits and Dawkins was called for a technical foul. Dawkins said it was the right call.

“I was just more or less trying to get my team going,” Dawkins said. “I thought we were losing momentum, we had already burned a timeout and it was a situation where I wanted to get our guys fired up.”

Sibert nailed a 3-pointer from the corner to give Dayton a 42-29 lead, though the Flyers had to settle for a 42-32 halftime advantage.

Stanford made a comeback early in the second half — as famous Cardinal supporters Seattle Seahawks cornerback Richard Sherman and former Secretary of State Condoleezza Rice looked on — thanks to strong post play.

But the Cardinal simply couldn’t stay out of foul trouble. Nastic — who was leading Stanford with 13 points at the time — picked up his fourth foul with more than 13 minutes remaining and fouled out with more than five minutes left.

Stanford managed to pull within 64-58 after Powell made the bucket and free throw after being fouled, but the Cardinal couldn’t get any closer. The Flyers simply kept sending waves at the Cardinal, scoring from inside and out in the final minutes.

Both teams had made impressive runs to make it to this point. Dayton had knocked off in-state rival Ohio State and Syracuse while Stanford has dispatched higher-seeds New Mexico and Kansas.