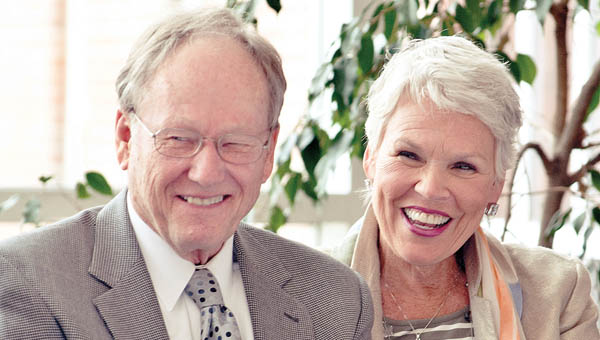 Bob and Billie Smith were honored for their community service efforts by Leadership Tri-State.

Bob and Billie Smith could be considered Lawrence County’s version of a Hollywood power couple. But the Smiths don’t spend their time visiting villages in foreign countries or protesting at political conventions. To see their impact one doesn’t have to leave the Tri-State.

The benefits and widespread influence of their efforts were recognized during Leadership Tri-State’s Community Service Award Lunch on Thursday in the Mains Rotunda at Ohio University Southern.

“Bob Smith is truly one of the kindest, most decent people I’ve ever met in my life,” Rob Johnson, master of ceremonies, WSAZ news anchor and son of Leadership Tri-State’s co-founder Boz Johnson, said of his former colleague. “He managed to survive being around the crisis of a newsroom every day and still came out as a pretty good guy. You’re my inspiration that I can go through this and come out an OK guy.”

Johnson said the Smiths are perfect examples of what Leadership Tri-State is about.

“Helping across three states is what Bob and Billie have been doing for a long time,” he said. “That’s why I’m proud to honor them here today.”

Lawrence Economic Development Corporation Executive Director Dr. Bill Dingus said he spoke to an individual prior to the ceremony who said he was excited to attend an event for Bob Smith that wasn’t a retirement party.

“After retiring four times I have come to one conclusion: I can’t keep a job,” Bob said.

“The circumstances in life just seem to happen sometimes and that’s the way it’s been for me. Every job I’ve had, every opportunity I’ve had just seems to fall into place and I thank the good Lord for that; for directing me and keeping me on the right path.”

Dingus praised Bob for “raising the bar” in regard to reporting the news.

“He’s reached millions of people,” Dingus said. “He became the eyes and the emotions of the Tri-State during the Marshall plane crash. He’s a person who set 11:20 p.m. as bedtime in our homes.”

Dingus spoke about his time as dean of OUS and Bob aiding in a successful fundraising effort, his help in an OUS parenting program becoming national and his time as Lawrence County Chamber of Commerce’s director.

“Fundamentally, 100 percent, he is a good person,” Dingus said. “We’re very fortunate in this county to have Bob. I personally am very fortunate to have Bob touch my life. Every person in this room can share great experiences that have to do with Bob.”

Coordinator of the Lawrence-Scioto County Solid Waste Management District Dan Palmer introduced Billie, who he admitted was someone he knew he would get to know.

“Shortly after I became director in 2006 people kept coming up to me and asking ‘Have you met the president of Operation TLC,’” he said. “’Have you had the chance to talk to Billie Smith? Dan, you need to call Billie and schedule a meeting with her. I thought, ‘Who is this Billie Smith and what is TLC? After a few minutes of a phone conversation, I realized what an inspiring person she was. She had so much enthusiasm, energy and commitment to join us and help clean up Lawrence County.” Billie and Palmer have worked together on numerous projects such as ridding the county of litter and illegally dumped tires.

Palmer said she called him one day with the license plate number of a man she saw throw litter out his car window.

“I told my enforcement officer he better get on it,” Palmer said.

Operation TLC (Tidy-up Lawrence County) was spawned on a drive to Proctorville from her sister’s house in Chesapeake, Billie said.

“I just noticed how beautiful everything was,” she said. “The sky, the river valley, the river; it was everything in between that was just yucky.”

Operation TLC started in 2005 and its spring cleanup, the 28th cleanup since its inception, begins at 9 a.m. Saturday. Volunteers will clean between the 31st Street and Sixth Street bridges, an area Billie said the group adopted.

“I can’t think of anything more satisfying for me personally than giving back to something (Lawrence County) that means so much to me,” Billie said. “The people of Lawrence County have been so kind and generous. They have been for all our ventures and I can’t say enough about the people of Leadership Tri-State for bestowing this wonderful honor on us.”

Leadership Tri-State chair Vivian Vallance first met Bob during his tenure at the chamber of commerce and said when the committee chooses an individual or individuals to honor it tends to be a person or people who encompass the mindset of the community.

“I have never met such wonderful people in my life as Bob and Billie,” she said. “You two are so inspiring and you love the community so much. You’ve spent your entire lives giving your entire heart to everything you do. Truly, I feel like you are the type of people God intended all of us to be like.”

Bob didn’t take all the credit for the positive way people view him.

“I’d like to borrow the phrase, It Takes a Village,” he said. “To have success in life, throughout my entire career, or careers, I’ve had good people around me, mentoring me, counseling me giving me all kinds of good, good advice. This is overwhelming, we are humbled by this award and in the immortal words of Elvis, I’m ‘All Shook Up.’”

More than 50 percent would need school board’s OK   The topic of tax abatements for businesses has been discussed... read more