iPads bought through grant handed out 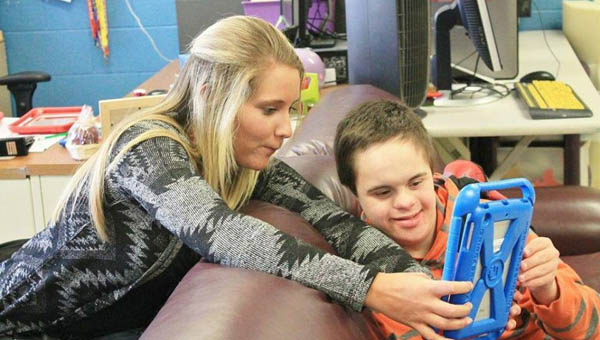 Rock Hill High School senior and National Honor Society member Allison Schwab tutors student Nathan Welch about features on one of the new iPads for the school’s Multi-handicapped Classroom purchased with money obtained from a grant written by Schwab.

The Rock Hill School District’s Multi-handicapped Classroom recently received new iPads thanks to a $2,000 grant obtained by a member of the Rock Hill National Honor Society.

RHHS senior Allison Schwab wrote a grant in early January for $2,000 to the Mike Furrey Foundation to get iPads for the class.

“Other classrooms use iPads regularly, but not the multi-handicapped class,” Schwab said.

The Mike Furrey Foundation is a 501(c)3 organization designed to improve the lives of those who are hungry, hurting, homeless or hopeful. The foundation advocates for the basic needs of all people to be met. The Rock Hill National Honor Society had worked with the foundation previously for its “Baskets of Hope” effort.

The iPads were donated in memory of Schwab’s father, Richard, and in honor of her fellow churchgoer, Morris Jenkins, a substitute teacher who lost his battle with cancer in February. The tablets feature an engraving in memory of the two men.

FAA funds for upgrades expected to pay for acreage

The money to pay for acreage at the Lawrence County Airpark the county acquired through an eminent domain lawsuit will... read more