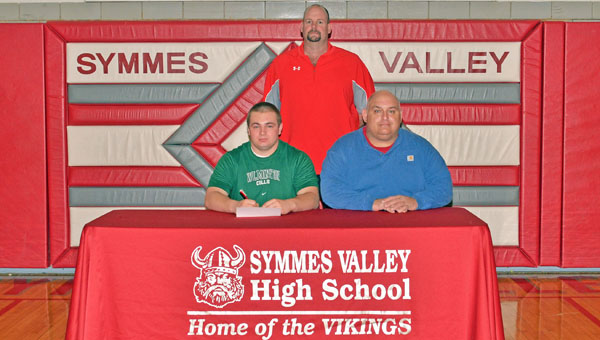 WILLOW WOOD — Ben Ferguson is no prophet, but he does have a vision of the future.

Ferguson sees a bright future after signing a letter-of-intent Friday to play for the Wilmington College Fighting Quakers.

“I visited there and I really liked it. And besides, the degree they have — athletic training — is one of the best in the country so it just fit really well.”

The 6-foot-1, 240-pound senior lineman was a two-year starter and All-Southern Ohio Conference player for the Vikings.

The Fighting Quakers are trying to rebuild after going 0-10 last season. Ferguson will play defensive end and he is hoping to help improved a defense that allowed 50.1 points a game and 476 total yards.

“They want me to play strong side defensive end and I hope to make an impact right away. They said there was a pretty good chance that right away I could start or get on the field some,” said Ferguson.

“It’s going to take a lot of dedication and hard work. I have to get bigger, stronger, faster.”

Based on his past history, Vikings’ coach Rusty Webb thinks Ferguson will be an early contributor for the Wilmington defense.

“Ben came to us his sophomore year and had to sit the first five games, but we knew we had a pretty good player,” said Webb.

“Ben had been a hard worker on the field and in the weight room. He’s going to get bigger and stronger and that will help him at the next level. I can see him making an impact early.”