Volunteers give up Saturday to help out community 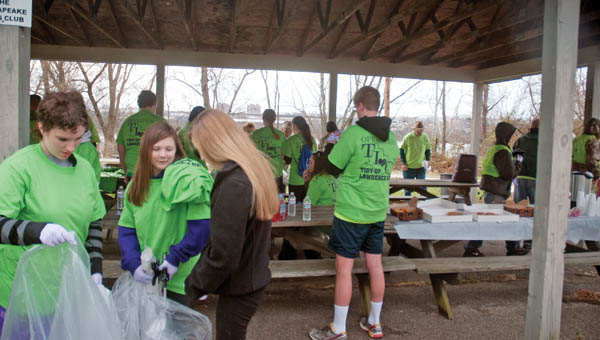 Volunteers get supplies ready to go out to clean on Saturday.

CHESAPEAKE — Hannah Frazer still wonders what a pair of fuzzy bedroom slippers was doing along the side of State Route 7.

That was just one of the oddball items the Fairland High School junior got to dispose of when she and her friends joined last fall’s TLC cleanup.

“It was fun,” she said. “I got some gross things. I found shoes, a hat and some pants and other things I won’t mention.”

Gross stuff aside, Hannah decided to come back for the first TLC cleanup of the season on Saturday, starting at the Chesapeake Community Center.

There volunteers gathered before 9 a.m. to sip coffee and have a donut or two before heading out for three hours of walking, bending, stooping and picking up litter at 10 locations along State Route 7 from the Sixth Street Bridge in Chesapeake to the 31st Street Bridge in Proctorville.

Under the picnic shelter at the center, Billie Smith, one of TLC’s co-founders, dispensed green TLC shirts, disposable gloves and bags, making sure every volunteer wore the shirt to let motorists know who they were.

“Thank you all for coming when you could have slept in,” she told the 30 volunteers who came to the Chesapeake center. “We have this wonderful opportunity to be servants.”

Next she went through the list of Ohio Department of Transportation rules including working on one side of the road at a time and not picking up syringes, needles and toxic materials.

Then Smith’s husband, Bob Smith, gave a prayer, asking God to protect each volunteer as he or she goes out. Then they were off. For the next three hours, groups of three or four wearing their neon green shirts could be seen up and down the highway.

Keeping her home county clean has always been a cause near and dear to Smith’s heart. As the volunteer organization enters its 10th year, Smith said community response has kept her and TLC going.

“We live here and see (the litter) every day,” she said. “It is a problem that won’t go away. My sister, Kathy Gue, is incredibly encouraging. We keep each other inspired. Someone in the community will offer support. The Lions Club has adopted us. We keep getting encouragement.”

Saturday was TLC’s 28th cleanup of the stretch of highway the organization has adopted for ODOT.

Teaming up with Hannah were classmates Micayla Booten and Maleea Roy, both of whom had volunteered for the cleanup before.

“This is not just going out with friends, but it is for a good cause and it helps out the community,” Maleea said.

“It is unfair litter is around, but it is nice to be able to solve it temporarily,” Micayla said.