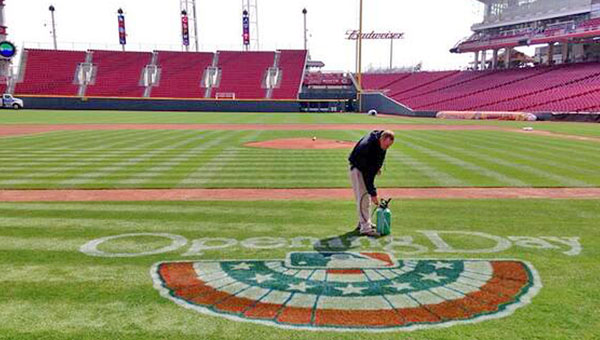 CINCINNATI (AP) — No waiting for one of the NL Central’s longstanding rivalries to resume. The Cardinals and Reds can start playing their annual game of look-who’s-in-first right from the first pitch.

The defending National League champions will open the season in Cincinnati on Monday afternoon, only the second time in the last 20 years that they’ve squared off to start the season. It’s an appropriate beginning — the season often ends with one of those two at the top.

They’ve won four of the last five NL Central titles — two apiece — and played some of the most intense games in the division. They get back at it on Monday with 19-game winner Adam Wainwright starting for the defending champs against Johnny Cueto, the Reds’ ace who is trying to stay healthy.

The capacity crowd at Great American Ball Park will be there to boo catcher Yadier Molina — they still haven’t forgotten about that brawl at home plate with Reds second baseman Brandon Phillips from 2010.

They’ll also be there to cheer a newcomer — speedy Billy Hamilton, who stole 13 bases in his debut last September and will be leading off this season and playing center field.

“Opening day is big in the minor leagues, but nothing like here,” Hamilton said.

Much of the focus will be on how the Reds handle their injuries. Cincinnati opens the season with a major league-high eight players on the disabled list, their highest number since 2007. The list includes starter Mat Latos, closer Aroldis Chapman and catcher Devin Mesoraco.

It wasn’t a very good spring for Cincinnati. Latos tore cartilage in his left knee while throwing and had surgery the day camp opened. Chapman got hit in the forehead by a line drive and will be out for at least a month. Nobody else on the active roster has significant experience closing games in the majors, so first-year manager Bryan Price will mix and match in the ninth inning.

“It seems like we have caught some bad luck,” first baseman Joey Votto said. “A lot of teams deal with this. It’s very common. I think we’re a resilient team. I think we’re deep in talent and I think we can withstand this.”

The Reds failed to catch St. Louis last season, settling for a wild card. They went to Pittsburgh and lost the one-game playoff, the third time in the last four seasons that Cincinnati couldn’t get past the first round.

Dusty Baker was fired and replaced by Price, a former pitching coach who has a depleted roster as he starts his first season as a manager.

“All we can do is be optimistic going into the season,” Price said. “We know that we have the bulk of our team intact. We know we have some guys getting healthy and they’re on the way.

They get to start against a pitcher who is tough on everyone except them.

Wainwright went 1-3 in four starts against Cincinnati last season with a 7.77 ERA. In his last two starts against the Reds, he gave up 18 hits and 15 runs in only eight innings. He lasted a career-low two innings in one of those starts.

Wainwright has no explanation, calling it a “head-scratcher.” Manager Mike Matheny is eager to see how he fares on Monday with a sinker that he’s added.

“He’s pitching completely different than what people saw,” Matheny said. “They’re not going to be prepared for what he is doing right now, because I don’t know if you can.”

Ready or not, the rivalry resumes.

CINCINNATI (AP) — The Reds will open the season with eight players on the disabled list, including starter Mat Latos,... read more