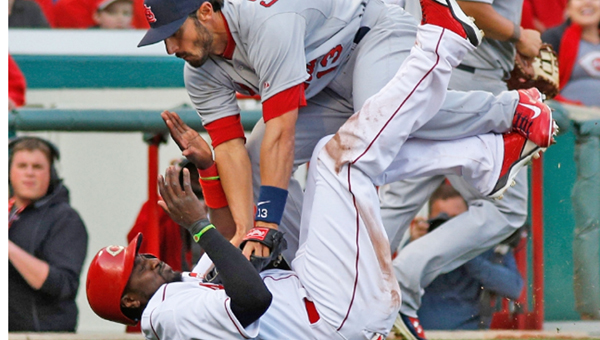 Cincinnati Reds’ Brandon Phillips is tagged out by St. Louis’ Matt Carpenter during a rundown in the eighth inning Monday. The Cardinals blanked the Reds 1-0 on Opening Day. (Photo Courtesy of The Cincinnati Reds)

CINCINNATI — If the other team doesn’t score, you don’t lose too many.

That was the case Monday as the St. Louis Cardinals needed just one run to blank the Cincinnati Reds 1-0 in the season opener.

The Reds were shut out on Opening Day for the first time since 1953 when they lost to the Milwaukee Brewers 2-0. It was the second longest streak in major league history, second only to the Philadelphia Phillies who went 62 years from 1911-72.

Johnny Cueto turned in a stellar performance as he gave up three hits, struck out eight and walked one in seven innings.

The only run was a solo home run by Cardinals’ catcher Yadier Molina with one out in the seventh inning.

“You’re accustomed to that type of performance. Not only was he healthy, he seemed free-and-easy. He was letting it go. He gave us a great chance to win.”

Molina drew a chorus of loud boos from the 43,134 fans — the second largest for a regular season game at Great American Ball Park — as he circled the bases. Molina was at the center of a homeplate brawl in 2010 with the Reds’ Brandon Phillips.

But St. Louis’ starter Adam Wainwright was equal to the challenge. He also went seven innings and allowed three hits while striking out nine and walking four.

Although Wainwright was the runner-up last season in the National League Cy Young Award voting, he was 1-3 against the Reds with a 7.77 ERA last season.

“I’ve never pitched great against the Reds,” said Wainwright. “Today I wanted to make the emphasis on executing pitches. I tried to simplify it as much as possible.”

The only threat against Wainwright came in the second inning.

Todd Frazier — who was 2-for-3 on the day — singled with one out and stole second. Zack Cozart was called out on strikes and then Brayan Pena was issued an intentional walk to bring Cueto to the plate.

The Reds’ pitcher went down on strikes when he missed a bunt attempt on a 1-2 count.

The Reds had their best chance to score in the eighth inning with the help of two Cardinal errors.

Phillips walked to start the inning against Pat Neshek. Kevin Siegrist came in to face Joey Votto whose potential double play ground ball went through the legs of Kolten Wong and Phillips went to third base.

Jay Bruce hit a ground ball to first base and Matt Adams came up running at Phillips who broke for home. Phillips was tagged out but Phillips was unable to advance to third.

Carlos Martinez came on to face Ryan Ludwick who hit into another potential double play only to have the return throw to first base dropped by Adams leaving runners on the corners.

But Martinez struck out Frazier looking to end the threat.

“We weren’t able to get a hit there. It was disappointing, but there will be more disappointments along the way,” said Price.

Trevor Rosenthal — the fourth reliever used by Cardinals’ manager Mike Matheny — struck out two of the three batters he faced in the ninth inning to record the save.

Rookie centerfielder Billy Hamilton had a rough debut. The speedy and exciting base runner never got to show his skills as he struck out in all four of his plate appearances.

The two teams are off Tuesday and meet Wednesday night when the Reds’ Tony Cingrani goes against the Cardinals’ Michael Wacha.

Chapman will see doctor on Wednesday