Reds come up short again in loss to Cards 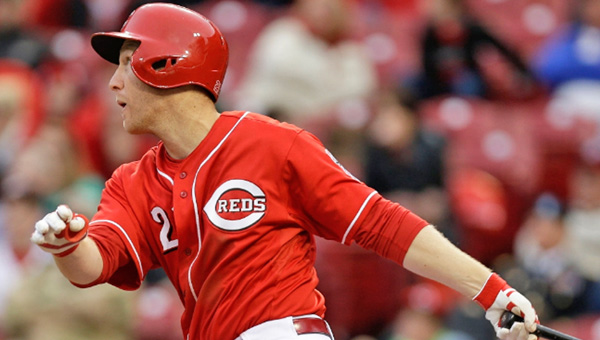 Cincinnati third baseman Todd Frazier connects for a three-run homer to right field, his second home run of the game. The Reds lost to the Cardinals 7-6.
(Photos Courtesy of The Cincinnati Reds)

CINCINNATI (AP) — For the Reds, it sure wasn’t worth the wait.

The St. Louis Cardinals overcame another long delay and Todd Frazier’s two homers on Thursday, holding on to beat Cincinnati 7-6 and take two of three in their season-opening series.

The first pitch was delayed 3 hours, 42 minutes because of rain. Finally on the field, the Cardinals emerged from their two-game hitting slump by knocking Homer Bailey (0-1) out of the game in the fifth inning. Jhonny Peralta homered to get it going.

“The whole series was kind of weird with all the rain and stuff,” Frazier said. “It really put a damper on things.”

St. Louis pulled away with three runs in the seventh, when Matt Holliday’s single off the top of the outfield wall was upheld by the only video review of the series, this one initiated by the umpires.

“They fouled off a lot of tough pitches before getting ones they could put into play,” manager Bryan Price said. “It wasn’t a big swing-and-miss day for them. Homer wasn’t as sharp as we anticipate he’ll be.”

Lance Lynn (1-0) gave up Jay Bruce’s two-run homer and Frazier’s solo shot during five innings. Frazier added a three-run homer in the seventh that cut it to 7-6. Trevor Rosenthal got the last four outs for his second save.

The series involved nearly as much waiting as playing.

There was a 2-hour, 40-minute delay before Wednesday’s game, a 1-0 victory by Cincinnati. Along with the delay on Thursday, the teams wound up waiting 6 hours, 22 minutes to play during the two days.

The starters had a rough time after the delay.

Lynn beat the Reds three times last season, but couldn’t get a 1-2-3 inning on Thursday. Bruce and Frazier hit back-to-back homers in the first for a 3-0 lead. Even Bailey had a single off Lynn, who gave up eight hits while throwing 107 pitches.

“That’s what we need to do,” Frazier said. “We showed we’re a team that can hit, a team that can put runs up, and the pitching’s always there. We’ve just got to finish.”

Peralta hit a two-run homer in the second, and the Cardinals tied it with a breakthrough hit in the fourth. Matt Adams doubled and came around on Jon Jay’s double, the Cardinals’ first hit with a runner in scoring position this season. They had been 0 for 17.

Jay’s hit also extended his hitting streak to 15 games, including the end of last season.

Holliday’s first hit of the season, an RBI double, put the Cardinals up 4-3 in the fifth. Bailey lasted only 4 1-3 innings, giving up seven hits, three walks and four runs.

Bailey missed time during spring training because of a strained groin and wasn’t as sharp with his pitches.

“It just means that 2 1/2 weeks without stepping on the mound came back to bite me,” Bailey said.

The Cardinals added three in the seventh, when they loaded the bases on a pair of walks and Holliday’s single off the top of the wall. The ball went over Billy Hamilton’s glove and deflected to Bruce, who caught the ball. The umpires correctly ruled that it a hit off the top of the wall, and a 2-minute, 8-second review initiated by the umps upheld the call. They wanted to make sure the ball hadn’t cleared the wall.

NOTES: The game ended 7 hours, 23 minutes after it was originally scheduled to start. … Shelby Miller starts for the Cardinals in Pittsburgh on Friday against Gerrit Cole. Mike Leake goes for the Reds in New York against the Mets’ Jenrry Mejia. … Adams dived into the stands trying to catch a foul ball, and pushed a fan who reached up and caught it before he could get it. “I was trying to stop myself from going into the stands,” Adams said. “People came up to me and said I shoved him. I didn’t even know. I’m not that type of guy to go after anybody.” … It was Frazier’s fourth career multihomer game. … Hamilton walked in the eighth inning, reaching base for the first time this season. He is 0 for 12 with six strikeouts.

BOSTON (AP) — Boston College is turning to another small conference coach to make the Eagles competitive in the Atlantic... read more