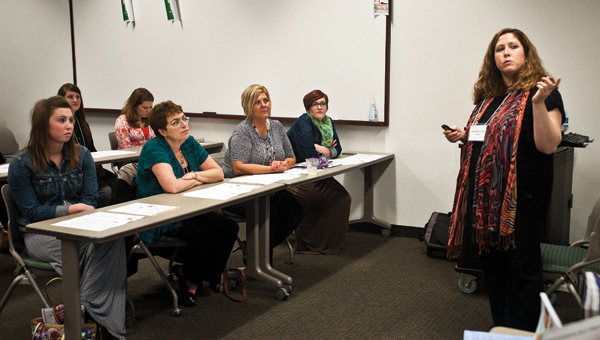 Women gather for a workshop “What’s So Essential About Essential Oils” on Friday at the annual Women’s Conference.

The Ohio University Southern Proctorville Center was filled with women on Friday who all shared common goals: Acknowledging, empowering, supporting and enriching, which were the themes of the 4th annual Women’s Conference.

Keynote speaker was Lawrence County native and current President and CEO of the Foundation for Appalachia Ohio Cara Dingus Brook.

“During a time when Cara was battling cancer; a difficult time, a struggle,” Stephanie Burcham, OUS Proctorville Center Director, said when introducing Brook. “She was selfless, she didn’t think of herself. She thought of others. Even when she was weak, she was strong. She wanted people to see the affects of cancer up close and personal and we thank you for your courage, your strength and just your willingness to share your experiences to help others grow.”

Brook said it felt good to be home.

“It’s amazing how fast life does go and it’s a real honor to be here,” Brook said. “There is life beyond high school – and it gets a little better I think.”

Brook said she is amazed at the twists and turns her life has taken just in the last 15 years.

“Someone asked me yesterday what my plans are for the future and I thought to myself that I’ve never really had a plan,” she said. “I used to worry about that until I read a book called The Pastor by Eugene H. Peterson and he wrote about life patterns being like that of a dog sniffing its way from bush, to hydrant to tree. I thought, ‘That’s me, that’s my life’s pattern.’”

Brook started at FAO as an intern at age 25 and said she loves it as much at age 32 as she did then.

“I could not imagine the career path I have taken. When I was in high school I didn’t know the difference from a philanthropist and a philanderer, and there’s a big difference,” she said. “I walk into my office in the morning and I can’t believe I get to do such special work.”

She said she was led to her work by many of the people in the room and credited women and mentors for giving her “really good” advice.

“I think the best thing to do is to celebrate them,” she said. “I look out into this room and there’s so much I can learn from all of you. Your motivation and your energy are contagious. Thank all of you and I promise with all my heart to pay it forward.”

Brook has a long record of service to the region. Before joining the FAO, she was the Southeast Ohio District Representative for United States Sen. George V. Voinovich and manager of Appalachian Ohio Giving, a multisector partnership promoting philanthropy as a community and economic development tool. Since Brook became CEO of FAO its assets have tripled.

Brook received a master’s degree in public administration and a bachelor’s degree in English from Ohio University. She was the recipient of the Appalachian New Economy Partnership Award for Regional Economic Development from the Voinovich School for Leadership and Public Affairs in 2010 and the Young Alumni “Spirit” Award from Ohio University’s College of Arts and Sciences in 2011, recognizing her public service contributions. She is also a graduate of the Jo Ann Davidson Leadership Institute and received Philanthropy Ohio’s Emerging Philanthropist Award in 2013.

The conference featured 12 sessions throughout the day such as What Will Your Verse Be?, Benefits of Community Gardens, Women’s Boxing Workshop, Your Heart Health, Dress For Success, Bullying, Securing Your Legal Future, Day Trips Around the Tri-State and Beyond, Manners Matter, What’s So Essential About Essential Oils, Understanding and Inproving Self-Esteem, Computer Tolls that Simplify Life and more.

Bond set for 2 in meth case