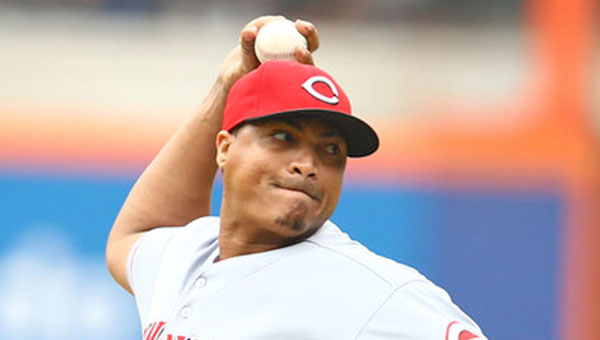 Turns out, all the Cincinnati Reds needed for a win in New York was a little role reversal.

Simon pitched seven impressive innings and began the go-ahead rally with his second career hit and Parra got the final six outs for his first career save, helping the Reds beat the Mets 2-1 Sunday to salvage a win in the three-game series.

“At the end of the game I didn’t even really know what to do,” Parra said. “It was awesome.”

Joey Votto had a sacrifice fly and Ryan Ludwick a tiebreaking single off Jonathon Niese (0-1), who was making his first start of the season after a being slowed by shoulder and elbow injuries this spring.

Simon (1-0) made 99 relief appearances for the Reds since his previous start, on Sept. 28, 2011, for Baltimore, but manager Bryan Price tapped the right-hander because Mat Latos is rehabbing from knee and elbow operations.

Price said Simon is one of the most durable guys on the staff and had no problem letting him go deep into the game. He lifted Simon for the left-handed Parra to start the eighth after allowing just four hits and throwing 79 pitches.

“I was thinking I was a starter before and this is a good opportunity for me, and I tried to show the best I can,” Simon said after his 20th career start. “Everything worked.”

Parra made 74 starts for the Brewers before switching to relief work in 2010. He retired all six batters he faced, pitching the ninth instead of J.J. Hoover, who gave up Ike Davis’ walkoff grand slam Saturday.

Parra struck out Davis to end the Reds’ second win of the season then stood atop the mound for a moment before pounding his glove and walking toward catcher Brayan Pena.

“Can’t ask for any more for Simon and Manny Parra,” Price said.

Niese was nearly as effective in his debut, allowing six hits and two runs in 5 2-3 innings in front of dozens of dogs at Citi Field on Bark in the Park day.

“I feel good, felt like the ball was coming out of my hand pretty well, obviously didn’t have any pain,” Niese said.

The Mets, though, wasted an opportunity to complete a sweep ahead of a nine-game road trip that begins in Atlanta on Tuesday. The Mets finished their first homestand of the season 2-4.

Simon took the mound in a game for the first time since March 24 but there was little rust.

After an easy first for Simon, Davis slashed a sharp one-out grounder the opposite way down the third base line, a spot vacated by the pull shift, for a double. Davis scored on Juan Lagares’ single for a 1-0 lead.

An inning later, Simon walked Niese and Eric Young Jr. doubled to left-center with one out. But Daniel Murphy and David Wright struck out, starting a run of 10 in a row that ended when Simon hit Wright with a pitch.

Simon started the Reds’ go-ahead rally in the sixth by lacing a line drive over Murphy’s head. Chris Heisey, in the lineup for Billy Hamilton, who has a jammed left middle finger, and Brandon Phillips each singled to load the bases. Votto followed with a sacrifice fly and Ludwick the tiebreaking hit, a single to left for a 2-1 lead.

“The way he kept his sinker down and the fact he got a base hit, it was very exciting,” Pena said of Simon. “He got us going.”

Jay Bruce grounded to first base, ending Niese’s day on his 90th pitch.

Gonzalez Germen relieved and pitched around Todd Frazier to face Zack Cosart with the bases loaded. Cosart grounded out to extend his hitless start to 0 for 18. Cosart then flew out to right field in the ninth.

NOTES: Simon singled last season against Pittsburgh. … Phillips has a hit in all 29 games he’s played against the Mets in New York. … Reds CF Billy Hamilton did not start for second straight day because of a jammed left middle finger. He thinks he’ll be able to play Monday at St. Louis. … Mets INF Wilmer Flores was sent to Triple-A Las Vegas to make room for Niese. … Mets manager Terry Collins said he’s sticking to the plan to have Lucas Duda serve as starting first baseman. … Reds reliever Jonathan Broxton pitched the second of back-to-back outings for Double-A Pensacola. He gave up a hit in a scoreless inning Saturday night. … Price said C Devin Mesoraco (strained oblique) is set to meet the team in St. Louis.

Aaron Harrison (2) shoots a three-pointer over Josh Gasser (21) of Wisconsin which becomes the winning shot in the closing... read more