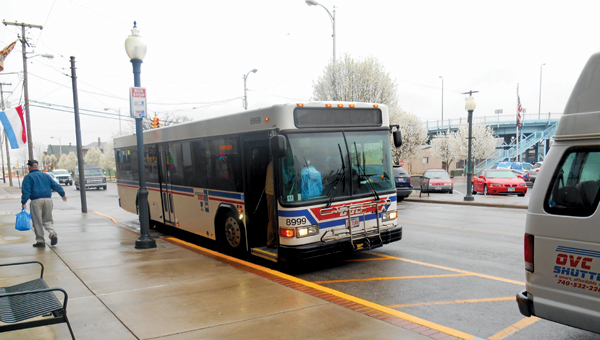 Express and shuttle buses wait by the transit center on opening day of the new service.

“A Smart Affordable Change” is the slogan on the new Ohio Valley Commuter Express buses that debuted on Monday as part of the Ironton-based transit system’s upgrades.

Transit officials are hoping more Lawrence County residents will take that advice to heart and save their pocketbook by riding the new express lines.

“The first bus left at 6:45 (in the morning),” Mike Payne, director of transportation of the Lawrence County Transit, said. “We had the express up and running and getting people to work.”

The new system will have fewer stops so commuters can get around the Tri-State faster because of the increased number of runs by the express that will travel exclusively on U.S. 52.

The buses run from the transit centers in Ironton, Huntington, W.Va., and Ashland Ky., with shuttle buses taking routes throughout the city limits of Ironton and parts of South Point and Burlington. Those shuttles will pick up riders needing to get to the Ironton center or the pickup location at the Walmart in South Point.

“We kept the same stops (in Ironton) that a TTA bus did run so the route would be familiar,” Payne said.

While the buses started early morning, by 9:30 a.m. there were only two commuters checking the latest schedules at the South Second Street transit center and were concerned about the runs.

“I don’t like the times,” Kim Mitchell of Ironton, said.

Mitchell depends on public transportation to get from her apartment to her job and was used to the bus she rode on running five times instead of now three times, she said.

“I need to be picked up by 7 a.m.,” she said. “I am hoping this will work out. They say they will accommodate.”

The travel time for trips from Ironton to Huntington, W.Va., is now cut down by half and taking only about a half-hour by the express that runs almost exclusively on U.S. 52. Besides the time factor, riding the bus can save on gasoline in a tough economy and cut out the hassle of finding a parking place, transit officials say.

At the kickoff on Monday was TTA General Manager and CEO Paul Davis to check out the new Ironton buses.

“I think it will offer express routes instead of having all those other stops in between and will reduce travel time and benefit our citizens,” Blankenship said.