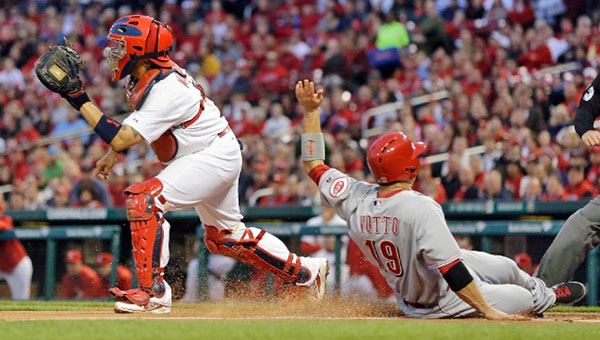 Cincinnati Reds’ first baseman Joey Votto (19) scores a run in the fifth inning. The Reds took the early lead but couldn’t hold on as St. Louis rallied to win 7-5. (Photo Courtesy of The Cincinnati Reds)

ST. LOUIS (AP) — Jay Bruce thought he had it, until the ball glanced off his glove. He wouldn’t have argued if it had been ruled an error.

“Obviously, you guys know I take a lot of pride in defense, that side of the game,” Bruce said after Matt Holliday’s drive to the warning track eluded him for a go-ahead two-run double in the St. Louis Cardinals’ 7-5 victory over the Cincinnati Reds on Tuesday night. “It might have been a tough play, but I should have caught that.”

Manager Bryan Price was not so tough on Bruce.

“I mean, it would have been a real nice catch,” Price said. “I can’t have any criticism for Jay Bruce because he busts his tail on defense every day, and I’ve had a chance to see it now for almost five years.”

Homer Bailey accepted his share of the blame, too, after squandering a 4-0 second-inning lead.

“Tonight I definitely feel like I deserve the loss,” Bailey said. “I guess you can always say it’s still early, but every single game counts.

Bruce appeared to have a bead on Holliday’s two-out drive with two on against Logan Ondrusek (0-1), but had to jump a bit at the last instant and the ball glanced off his glove as the Cardinals took a 6-5 lead. Peter Bourjos added an RBI single in the seventh off J.J. Hoover.

Yadier Molina homered and Bourjos had three hits and an RBI to help the Cardinals clinch their 26th series win to go with three losses and two splits at home since 2003 against Cincinnati ahead of the finale of a three-game series Wednesday.

“All the games count the same,” Bruce said. “We know if we’re going to do well in this division we’ve got to beat the Cardinals.”

Bruce had a two-run triple in the first, Billy Hamilton’s second hit of the season drove in a run and Ryan Ludwick had two RBIs for the Reds.

The Cardinals tied it in the bottom of the second and Lance Lynn (2-0) got enough support to beat Cincinnati for the second straight time.

Trevor Rosenthal finished for his third save in three chances.

Lynn is 5-1 for his career against the Reds, including three wins last year. Bailey is 5-11 against the Cardinals.

Joey Votto and Bruce had one-out hits in the fifth ahead of Ludwick’s run-scoring groundout for a 5-4 lead.

Cardinals leadoff man Matt Carpenter had two hits, an RBI and was hit by a pitch against Bailey. He’s 13 for 22 against the right-hander.

Notes: It was 61 degrees for the first pitch, a 12-degree improvement over the home opener Monday. … The Cardinals received World Series rings in a pre-game ceremony. “I’m going to be wearing this one,” manager Mike Matheny said. “My fingers have been busted up pretty bad, so they don’t hold rings real well. But I’m going to make sure this one stays with me for a while.” … Shelby Miller (0-1, 8.44) opposes Mike Leake (0-1, 5.40) in the series finale Wednesday afternoon. Miller gave up three solo homers in his first start at Pittsburgh. Leake makes his ninth start against the Cardinals but just his second on the road. … Rehabbing Reds reliever Sean Marshall (shoulder) is scheduled to throw an inning at extended spring training Wednesday.

Jim Walker jim.walker@irontontribune.com   Derek Battise pitched the pitches he wanted, and as a result he got the win the... read more