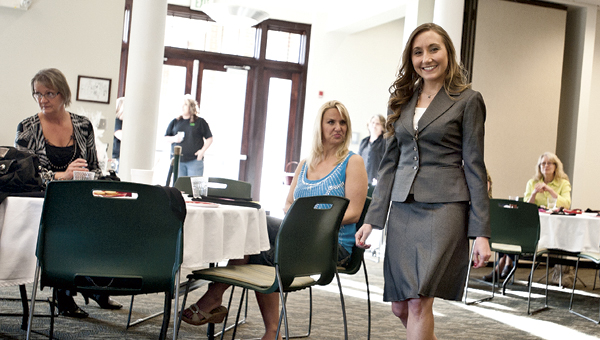 Kellie Steele shows off clothing provided by Dress for Success

PROCTORVILLE — A clothing drive spearheaded by Ohio University Southern senior Ashley Poff culminated on Tuesday with a “9 to 5 Comes Alive!” fashion show in the Commons Room at the OUS Proctorville Center.

The clothing drive benefits Dress for Success River Cities and garnered 300 articles of clothing for women of all ages and education levels who are trying to or entering the workforce.

“The models tonight are wearing clothes that were donated,” Poff said. “Everything you see here will be given back to Dress for Success after the event.”

The mission of Dress for Success River Cities is promoting the economic independence of disadvantaged women by providing professional attire, a network of support and the career development tools to help women thrive in work and in life.

“I am excited to have been asked to participate today,” Duffy said. “To see Ashley giving back to the community while pursuing her own goals is really an inspiration to all of us.”

Guest speaker Linda Merritt offered words of encouragement for the women in attendance.

“Average is just as close to the bottom as it is to the top,” she said. “You will remain the same until the pain of remaining the same is greater than the pain of change.”

Merritt then directed each person to tell the person next to them, “I’m great, you’re great and you better believe it.”

Door prizes were awarded and a silent auction took place at the event. Proceeds from the show benefit Dress for Success.

The Dress for Success office is located at 1141 Fourth Ave. in Huntington, W. Va. Qualification is income based and referrals from schools and other community organizations are accepted.

HANGING ROCK — The Ohio University Southern Early Childhood Development Center had a ceremony Tuesday to honor those who have... read more