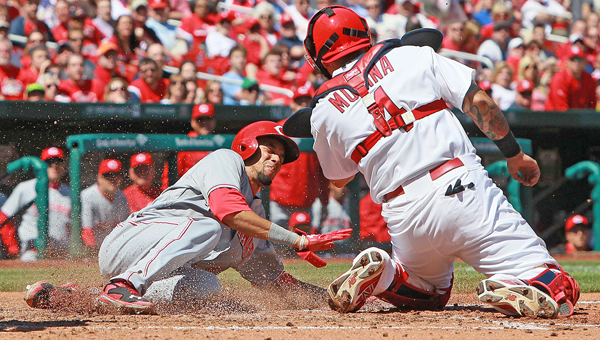 ST. LOUIS (AP) — The pop fly cleared the infield by about 20-25 feet. Billy Hamilton’s teammates have seen his legs in action, but figured he’d stay put at third.

“We didn’t even think there would be a chance he would go,” catcher Devin Mesoraco said after the Cincinnati Reds’ 4-0 victory over the St. Louis Cardinals on Wednesday. “As an outfielder, I’m sure you don’t expect anybody to go on that play.

“He gets everybody on their edge of their seat.”

Hamilton’s best game of the season by far backed a stingy outing from Mike Leake. The rookie had three hits and his first two steals — against six-time Gold Glove catcher Yadier Molina — plus that daring dash home on one of the shortest sacrifice flies you’ll see.

Hamilton said third base coach Steve Smith told him, “I want to see how fast you really are.”

It wasn’t even the shortest sacrifice fly he’s created. Against a drawn-in infield when he was at Class A Bakersfield, the year he stole a record 155 bases, Hamilton recalled scoring on a pop fly that stayed in the infield after the fielder was forced to turn around and chase down the ball.

“Guys were pressing a little bit and I told them ‘I’m going to make something happen for you,”’ Hamilton said. “If you get a chance to put the ball in play, I’ve got your back.”

Leake (1-1) allowed four hits and a walk in eight scoreless innings and Mesoraco hit a two-run home run for the Reds, who avoided a three-game sweep after dropping their ninth series in their last 10 in St. Louis. They’re 2-4 against the Cardinals, their NL Central rival, and wrapped up a 2-4 trip.

“That’s kind of as-advertised right there,” manager Bryan Price said. “We’ve been waiting for that game and I was really glad to see it.”

Shelby Miller (0-2) allowed his fourth homer in two starts and faced trouble most of his six innings, but held the Reds hitless in nine at-bats with runners in scoring position. Mesoraco hit his first homer in the fourth after doubling twice Tuesday in his first start after coming off the 15-day disabled list.

Hamilton entered batting .091 with two hits and seven strikeouts in 22 at-bats and left town batting .192. He reached safely his first three trips beginning with a triple to open the game when left fielder Matt Holliday missed on a diving catch in the gap.

After singling to start the fifth he put on a show with his legs, stealing second without a throw, going to third on a flyout to shallow right and scoring easily to beat Jon Jay’s’ relay on Bruce’s pop fly to even shallower right and put the Reds up 3-0.

“He’s fast,” Miller said. “I’ve never really seen somebody run the bases like he has.”

Cardinals manager Mike Matheny said Miller could have helped by being quicker to the plate.

“We were paying attention,” Matheny said. “It doesn’t matter if Yaddy is behind the plate (or) anybody else in the history of the game, if you don’t keep your times down they’re going to take bags on you.”

Hamilton bunted for a hit in the ninth against Pat Neshek and stole second, then scored without a throw on Brandon Phillips’ one-out single to make it 4-0.