Hats off to Holden 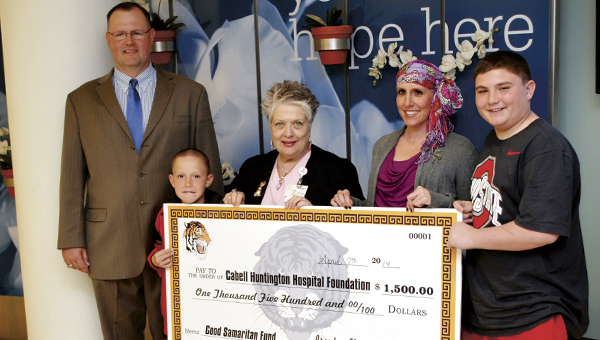 Topping’s headwear wasn’t an act of defiance; it was an act of solidarity. Just a few months early his mother, Stephanie Rodgers, was diagnosed with breast cancer. Her hair was falling out at an alarming rate due to the chemotherapy so she decided to shave it.

“I had a friend of mine come over and shave my head,” Rodgers said. “He didn’t hesitate. He instantly asked me if he could shave his head too.”

But, afterwards Topping had some reservations. He feared that his classmates would make fun of his bald head.

“I was afraid my friends would make fun of me,” Topping said. “I’m in third grade. Third graders aren’t supposed to be bald.”

So to hide his shaved head he wore a hat to school. However, his principal, John Maynard, never had any intentions of punishing the 8-year-old student.

“Once I heard why he had shaved his head, all I could think about was the bravery it took,” Maynard said. “But, I think the biggest lesson here is this is not about the individual. We focus on individuals a lot any more, but what makes Ironton special is the sense of community. Right now one of our own is hurting and we’ve rallied behind her and her family.”

Rally, may be an understatement. Once Topping’s classmates learned the story behind his shaved head they decided to do something to help his mother in her fight. Donations from students and their families began to pour in, and the school collected more than $1,500. On Monday, Topping and Ironton Elementary donated that money to the Edwards Comprehensive Cancer Center at Cabell Huntington Hospital.

“I’m proud beyond words of my boy,” Rodgers said. “Both my boys, he and my oldest one have been there for me from Day One. I just couldn’t ask for better boys. They’ve grown up a little fast, but they are learning to appreciate people and to understand everyone is dealing with something.”

One of the City of Ironton’s Riverfront Development project’s four phases is underway — a shared walking and bike trail... read more