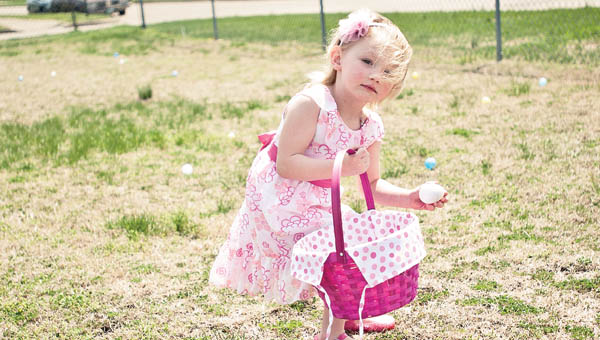 Aiden Justice of Ironton was perched on the lap of the Easter Bunny waiting for his cue.

“Look up here at me and I’ll take your picture,” Debbie Osborne, activities director at Sanctuary of the Ohio Valley, said.

She snapped away and then Aiden scooted off.

Child after child got his or her turn to get a photo with the Easter Bunny before the main event was to start.

“The Easter Bunny has put eggs all over the yard and you can hunt for prizes,” Osborne told the children who had come to the center to mark the season with the Sanctuary residents.

This was the second year for the center to invite the children of the staff there for a special egg hunt.

After the bunny posed prettily with all the children, he headed out to the backyard where 900 colored eggs were strewn. Inside each one was either candy, a prize or money. Certain eggs had the secret message that the holder had won a special prize to be given out after the hunt.

Giving the signal the bunny started the hunt as children with colorful pails raced over the grounds.

“This lets the residents see the little ones and it is a special payback to all the staff here,” Osborne said. “This is a thank you to all of them.”

The Lawrence County Commission approved a $32,146 match to receive almost $97,000 in funds for the Lawrence Drug and Major... read more