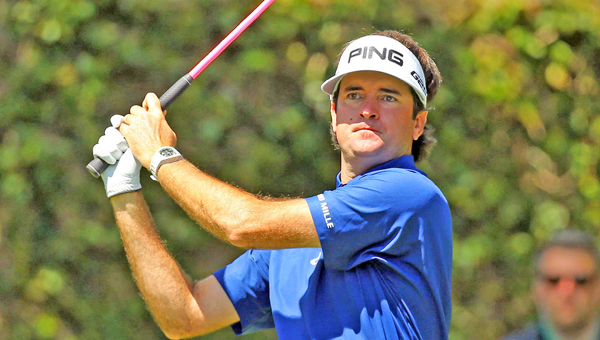 Bubba Watson shared the lead with Jordan Spieth at The Masters following the third round on Saturday. (MCT Direct Photos)

AUGUSTA, Ga. (AP) — Young and old. Even without Tiger Woods, this Masters has a little bit of everything.

Twenty-year-old Jordan Spieth is making quite a bid to become golf’s youngest major champion in more than 80 years with three straight sub-par rounds in his Augusta National debut.

He’ll have to fend off 50-year-old Miguel Angel Jimenez and 54-year-old Fred Couples, both hoping to become the sport’s oldest major champion.

And let’s not forget Bubba Watson, who stumbled a bit on moving day but will go for his second green jacket in three years from the final group.

Spieth, who last year became the youngest PGA tour winner since the Depression at age 19, shot a 2-under 70 on Saturday to share the lead with Watson.

“This is the place I’ve always dreamt about,” said Spieth, who was 5 under for the tournament. “I thought it was a good fit for my game. So far, so good.”

He has a shot at becoming the youngest major winner since Tom Creavey, just a few months younger when he won the PGA Championship in 1931.

Watson had four bogeys on the front side Saturday — twice as many as he had in the first two rounds combined — and slid back to an emboldened group of challengers with a 74.

He’ll go out in the last group with Spieth on Sunday.

“We’re pretty good friends,” Watson said. “It’s going to be fun. It will be interesting, but be fun. Hopefully one of us wins, if not me hopefully him.”

Watson, the 2012 Masters champion, posted two rounds in the 60s to start the tournament, giving him a three-stroke lead and the largest 36-hole edge since Chad Campbell in 2006.

By the time he made the turn in front of the historic clubhouse and that big oak tree, the edge was gone. He got it back with a birdie at the 10th, but a three-putt par at the par-5 13th kept things close, another par at the par-5 15th was a disappointment, and a bogey at the 16th left him staggering to the finish.

It shaped up to be a wide-open Sunday with Woods on the sideline for the first time in his career, recovering from back surgery.

Lee Westwood (70), Jim Furyk (72) and Thomas Bjorn (73) were all in the mix. And Couples did enough to hang around, managing a 73 that kept him within five strokes of the lead.

Watson bogeyed the first hole, then struck a brilliant approach shot that rolled up about 5 feet from the flag to set up an eagle 3 at the second. That would be one of his few highlights.

Jimenez posted the best round of the tournament thus far and matched the lowest score ever for a senior golfer at Augusta National. Ben Hogan was 54 when he shot 66 during the third round of the 1967 tournament, and Couples matched it at age 50 during the opening round in 2010.

The Spaniard known as “The Mechanic” finished up with a par at the 18th about the time Watson was teeing off at the adjacent first hole, having sliced into a 10-shot deficit by taking advantage of warm, sunny conditions. There was barely a hint of the swirling breezes that can make Augusta so treacherous.

Jimenez has never won a major championship but he’s been a perennial contender, capturing a new generation of fans with his unique stretching routine before each round, his red ponytail, and his fondness for wine and cigars.

“Just because you are 50 does not mean you cannot play golf,” said Jimenez, one of six 50-and-older golfers to make the Masters cut. “I’m still flexible. I hit the ball longer than ever.”

His wasn’t the only new entry in the Masters record book.

Gary Woodland matched the lowest score ever on the front nine with a 6-under 30, and actually got his score to 7 under with another birdie at the 10th. But the 29-year-old American couldn’t keep it going through Amen Corner, where a bogey at the 11th and a double bogey on 12 stifled his momentum.

Woodland struggled down the stretch and settled for a 69, which left him at 216.

Defending champion Adam Scott couldn’t get anything going, his chances of becoming only the fourth back-to-back winner in Masters history fading away with an ugly 40 on the front side. He faced a six-stroke deficit heading to Sunday, a daunting challenge with so many players in between him and the lead.

But plenty of others were ready to seize the spotlight.

CINCINNATI (AP) — Another game full of wasted chances and wasted pitching prompted the Reds to call for a meeting.... read more