A field of dreams 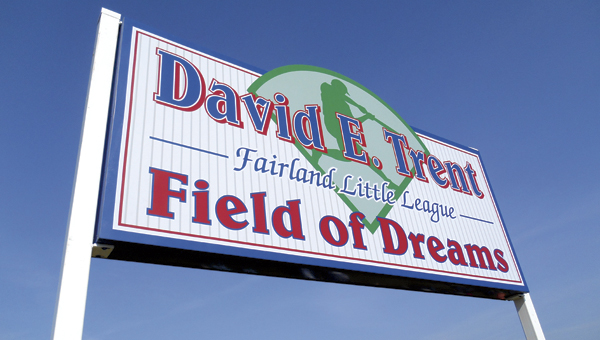 the tribune/justin prince
The newly unveiled sign honoring David Trent at the Fairland Little League complex. Trent was one of the league’s founding members.

In 1957 a group of men sat at a dinner table inside the restaurant of the Fredrick Hotel in Huntington, W.Va.

The discussion that night was about bringing baseball to youths in the Proctorville area. David Trent, a resident of Proctorville, was one of those men and he would become one of the league’s first coaches when it finally played its first season two years later in 1959.

“The president of all of Little League Baseball was even at that dinner,” said Gary Sowards, the current president of Fairland Little League. “They just discussed what it would take to bring baseball to our community and how to get it all started. It took them two years to get it going, but David Trent was one of the founding members of this league.”

Trent died this past November, but remained an instrumental figure in the league up until the time of his death. He even formed a deep bond and strong friendship with Sowards.

“The last 11 years I’ve been president he was my mentor,” Sowards said. “He was always there to give me advice on how to run the league and just talk about the game of baseball with me.”

On Saturday David’s son, Bruce, threw out the ceremonial first pitch that officially kicked off the league’s 55th season. The pitch was caught by David’s great-grandson Jake on what would be a special day for the entire Trent family as the Fairland Little League Field was dedicated and named in honor of David.

“My dad spoke to me just before he died,” Bruce said. “He was concerned about seeing how this field could become lighted. It was his dream to see this field light up and for these kids to be able to play under them.”

So the Trent family decided to follow through on the wishes of their patriarch. The family donated enough money to the league so that the main field of the complex could have lights put in. In gratitude Sowards, allowed the family to choose the new name of the field.

“He asked us what we would like to have the field named,” Bruce said, as he looked up at the newly unveiled field sign. “I couldn’t think of anything better than the ‘Field of Dreams,’ because that’s what it is. It was his dream.”

One of David’s former players Butch Smith, addressed the crowd Saturday just moments before the unveiling of the field’s new name. Smith spoke about David’s ability to not only make him a better player, but a better person as well.

“When Dave entered my life I was a fatherless little boy,” Smith said. “An unmolded piece of clay. He could have let me be absorbed by this world because he had his own family, but he didn’t. I learned by being around him, and his great examples rubbed off on me.”

Before the ceremony, Fairland Little League also had a parade down State Street in Proctorville to celebrate the start of the season. Included in the parade was a spirit competition between the teams judged by Freddie Hayes Jr., Scott Wilson, Connie Freeman and Ann Dennison. The winner of the spirit award went to the team sponsored by the Proctorville Masonic Lodge.

The wild, wild west invaded the Open Door School in Ironton on Friday night as the school hosted its 2014... read more