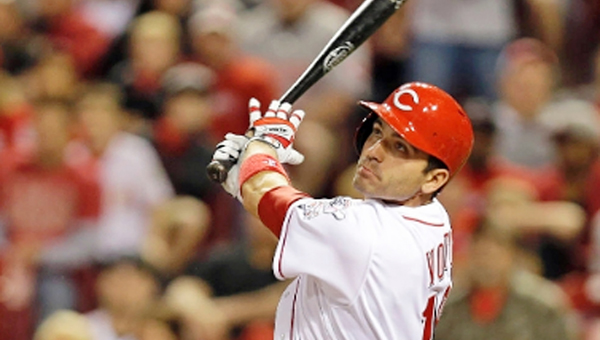 CINCINNATI (AP) — Ryan Ludwick had never experienced anything quite like this rainy night.

“Nope, not in 35 years,” the Cincinnati Reds outfielder said. “Well, make that 30. I started playing baseball when I was 5.”

No matter how long he plays, he’ll have a new reference point for weirdness. And the game’s not even over yet.

Neil Walker and Gaby Sanchez hit back-to-back homers twice, and the Pirates and Reds hit 10 homers in all before rain forced a suspension after six innings with the score tied 7-all on Monday night.

The shocking slugfest will resume Tuesday at 5:30 p.m. in the top of the seventh inning. Conditions are expected to be drier but much colder.

Not that the weather seems to matter much when these two rivals get together.

“I’ve never seen anything like that,” Reds manager Bryan Price said. “The way we got started, one team going in front of the other with home runs. I’ve seen a lot of home runs hit, but not in those conditions. You wouldn’t imagine they would carry that far.”

Pittsburgh hit six solo shots and Cincinnati had four homers, most of them into a heavy rain. Already, it’s the most homers in a major league game since 2006 and the most combined homers for a game in Great American Ball Park’s 12-year history.

The Ohio River rivals were known more for trading hit-by-pitches last season. The Pirates and Reds plunked each other 28 times — most in the majors — while nailing down the two NL wild-card spots.

Their first matchup of 2014 was more swing-away than get-out-of-the-way. Ten of the 17 combined hits so far have cleared the wall. All but one of the 14 runs has come on a homer.

“It wouldn’t be a Pittsburgh-Cincinnati game without some drama,” Walker said.

Pittsburgh went back-to-back three times. Walker and Sanchez did it in the second inning off Homer Bailey and again in the sixth off J.J. Hoover. Starling Marte and Travis Snider teamed up in the fifth against Bailey.

It was only the third time in major league history that a team had three sets of back-to-back homers in a game, according to STATS. The others: Cincinnati against the Braves in 1956, and Boston against the Yankees in 1977.

“I certainly wouldn’t think that I would find my way attached to a home run record,” Walker said. “The game’s not even over yet, so I don’t know how to express what’s going on. But that’s pretty cool.”

Both teams had a chance to take a lead with the rain coming down heavier and the field getting muddier. The starters and bullpens failed to hold on.

Wandy Rodriguez gave up Joey Votto’s two-out homer in the bottom of the fifth inning, putting Cincinnati up 6-5. The umpires inspected the infield, called for dry dirt and decided to continue.

Walker and Sanchez connected again off Hoover for a 7-6 lead in the sixth. It was only the second time that two Pirates went back-to-back twice in a game, according to STATS. Toby Atwell and Jerry Lynch also did it against the Reds on April 27, 1954.

Devin Mesoraco’s solo shot off Bryan Morris tied it at 7 in the bottom of the sixth. It was the first time since June 18, 2006, that two major league teams combined for 10 homers in a game — the Tigers hit eight and the Cubs three at Wrigley Field that day.

Something about Great American turns the Pirates into power hitters. They also hit six homers in Cincinnati last Sept. 28 during an 8-3 win that clinched home-field advantage for the NL wild-card game. Then they beat the Reds at PNC Park in the one-game playoff.

Pittsburgh has 14 homers in its last three games at Great American, four of them by Walker.

NOTES: Several hundred dogs were in the stands with their owners as part of an annual pet promotion. … Pirates manager Clint Hurdle said C Chris Stewart felt good after catching consecutive games in the minors as part of a rehab stint. Stewart had surgery on his right knee March 19. … Reds closer Aroldis Chapman threw 25 pitches in the bullpen before the game, the first time he’s thrown off a mound since he was hit in the face by a line drive on March 19. The Reds hope to have him back next month.