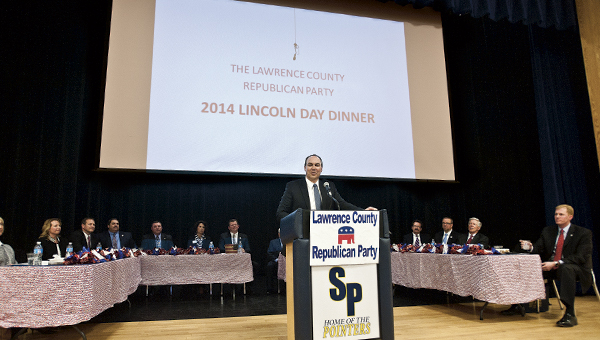 THE TRIBUNE/JESSICA ST JAMES
Joe Freeman and eventgoers sitting around him react to speakers on stage during the annual Lincoln Day Dinner Tuesday.

Few things are more unpredictable than Mother Nature. The Lawrence County Republican Party got a reminder of that Tuesday night as its Lincoln Day Dinner’s keynote speaker was stuck in Washington, D.C., after an unseasonal snowstorm hit the region.

Congressman Bill Johnson, R-6, was scheduled to speak to members of the Lawrence County GOP, on the anniversary of the assassination of Abraham Lincoln, the first Republican president of the United States. “I’ve got some bad news,” said Juli Stephens, a field representative for the congressman, as she addressed the crowd. “The congressman was unable to make it tonight. He got snowed in. He was going to fly in from D.C. but his flight was canceled. In April, you don’t even expect that kind of thing.”

The congressman’s absence did allow for local and state politicians to take the podium. County Commission President Les Boggs took a few minutes to discuss some of the positive things happening in Lawrence County.

“Good things are happening in our county,” Boggs said. “No matter how much negativity is talked about in our area, there are lots of positives. Take some of the economic development going on. The hotel and the Big Boy going into Ironton will bring in 80 new jobs between the two.”

State Sen. Bob Peterson, R-7, and State Rep. Ryan Smith, R-93, were given the chance to make some impromptu comments about their role in the party and the state government.

“Before I was a state senator I was a county commissioner in Fayette County,” Peterson said. “It’s a great feeling being able to do things that impact your community. But I found out in trying to bring jobs to my county that the things that were keeping jobs out were things I couldn’t control as a commissioner. So I decided to get more involved in what was happening in Columbus.”

Smith discussed a few issues that he was particularly passionate about including the drug problem in southeastern Ohio and the lack of high speed Internet in the rural areas.

“We obviously have a real drug problem here in our slice of Ohio,” Smith said. “The legislature has passed 15 bills to affect the supply of opiates, and the last one we passed also has some appropriations for treatment. Also I’ve been working to try and make high-speed Internet more accessible in our region. The only way out of poverty is education and not having fast Internet connection is a hindrance to education.”

It took less than half an hour for a jury of eight women and four men to decide the fate... read more