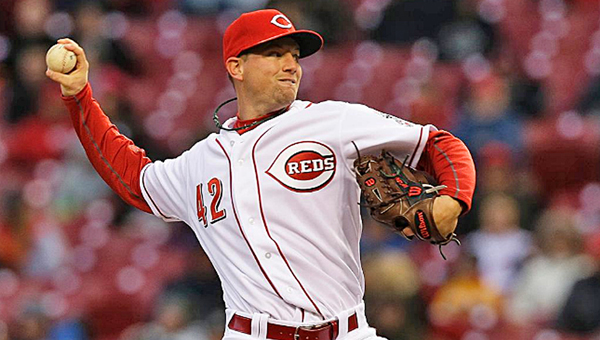 Cincinnati pitcher Mike Leake went 6.2 innings to get the win and belted a two-run homer as the Reds beat the Pittsburgh Pirates 7-5 Tuesday. (Photo Courtesy of The Cincinnati Reds)

CINCINNATI (AP) — Mike Leake still thinks of himself as a hitter. He’s even holding a bat on one of his 2014 baseball cards.

Leake doubled and hit a two-run homer Tuesday night, ending Gerrit Cole’s winning streak and leading the Cincinnati Reds to a 7-5 victory over the Pittsburgh Pirates that completed two days full of homers and delays.

First, the NL Central rivals completed a game that was suspended in the sixth inning because of rain the previous night. Andrew McCutchen doubled and came around on Russell Martin’s single in the seventh inning, giving the Pirates an 8-7 win.

Leake (2-1) gave up three runs and five hits in 6 2-3 innings for a split. The right-hander has won his last four starts against the Pirates. Jonathan Broxton pitched out of a two-on threat in the ninth, converting his first save chance.

Leake, who has the most hits by a major league pitcher since 2010, doubled and scored in the third. He hit his third career homer in the sixth off Cole (2-1), who had won his last six starts.

His first homer since 2012 showed why the card company decided on a photo of him holding a bat.

“And that comes after my worst year hitting,” Leake said. “It was bad timing on their part.”

Reds manager Bryan Price is impressed by how Leake approaches batting practice. He’s not just another pitcher trying to get in a few swings.

“He loves the challenge,” Price said. “Even when you come out early, he’s not just hitting. He’s running the bases and working on little things.

“When we give him the green light early in the at-bat, he works on getting a good pitch to hit.”

Leake got a good one from Cole, who left it up and over the plate. It wasn’t the first time that Cole had seen him latch onto a mistake. Cole went to UCLA and faced Leake when he played for Arizona State.

“That guy’s a good hitter as a pitcher,” Cole said. “I saw that at Arizona State. He wore us out at the plate. That’s not the first time he’s done stuff like that.”

The teams wore their customary uniforms for the completion of the suspended game, then switched to commemorative No. 42 Jackie Robinson jerseys for the later game, which started 5 minutes later than originally scheduled.

It’s been a wild series full of downpours, lead changes and home runs.

The teams put on a record-setting show Monday night before the game was suspended after six innings tied 7-all. They combined for 10 homers in those six innings, the most for a game in Great American Ball Park’s 12 seasons.

When play resumed, McCutchen doubled off Sam LeCure (0-1) and came around on a wild pitch and Martin’s single up the middle, only the second run of the game that didn’t come by way of a homer.

Bryan Morris (2-0) gave up Mesoraco’s tying solo homer in the sixth inning Monday night, but was still the pitcher of record. Jason Grilli pitched the ninth for his fourth save in five chances.

Pittsburgh had three sets of back-to-back homers before the game was suspended, only the third time that’s happened in major league history, according to STATS. The other two times: Cincinnati against the Braves in 1956, and Boston against the Yankees in 1977.

Pittsburgh hit six homers — all solo shots — and the Reds had four, all with two outs.

NOTES: It was 66 degrees for the first pitch on Monday, 39 degrees when the game resumed. … Leake has 59 career hits and 12 multihit games. … Mesoraco is 11 for 22 with three homers and nine RBIs in six games since returning from the DL. … Pittsburgh’s six homers in the suspended game were one shy of the club record. The six solo homers were one shy of the major league record. … The Pirates have 15 homers in their last four games at Great American. They also hit six during an 8-3 win on Sept. 28 that clinched home-field advantage for the NL wild-card playoff, a 6-2 win over Cincinnati at PNC Park.