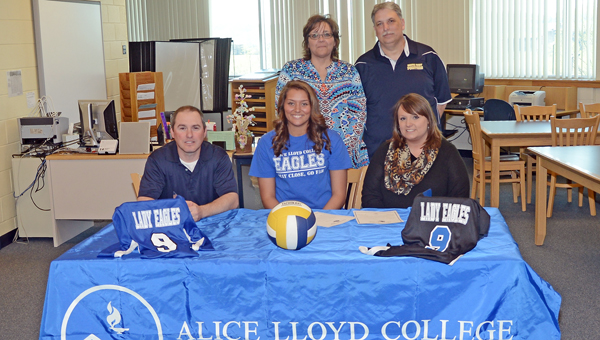 SOUTH POINT — High School seniors have a lot of thoughts about their future that run through their mind. One thing that wasn’t running through Lakin Adams’ mind was playing college sports.

Adams was contemplating her future when a friend led her in a surprising direction.

“I didn’t think about (playing college volleyball) at all. I didn’t want to go for a sport, but now that I have the opportunity I want to,” said Adams after signing a letter-of-intent to play for the Alice Lloyd College Lady Eagles.

Alice Lloyd was the only school Adams really pursued. Part of the reason was current Lady Eagle player and Chesapeake graduate Macy Allen.

“Macy Allen plays there and she told me how good it was and I went down there to visit and I ended up really liking it,” said Adams.

Coming from a small town, Adams said Alice Lloyd was a perfect fit.

“It’s a small, family-like college. There aren’t many people there and you can get one-on-one with the teacher. It’s a great school,” said Adams.

“I think Lakin will be a big asset to our program. Her height and strength will help us tremendously. We’re excited to have her and we know she will definitely benefit our program,” said Watts.

Alice Lloyd is in a transition period. The former head coach is taking a different position at the school and a new coach will be hired.

Watts doesn’t expect any change in Adams’ spot as a middle blocker.

“I’m pretty confident she’ll get plenty of playing time because she’s one of our stronger, taller players,” said Watts.

Lakin and her brother Kurt were born 10 months apart and both are seniors. Kurt plans to attend Ohio University and major in education.

She said going in different directions will be difficult.

Lakin — who plans to major in pre-law — is the daughter of Angie and Dave Adams.