Bailey continues his domination of Cubs 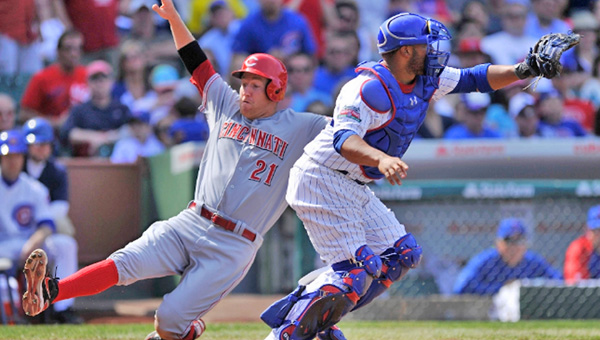 CHICAGO (AP) — Homer Bailey doesn’t even need to be at his best to win at Wrigley Field.

Bailey pitched six scoreless innings in a friendly ballpark for his first win of the season and Jay Bruce homered and doubled as the Cincinnati Reds beat the Chicago Cubs 8-2 on Sunday.

“He hasn’t been his normal dominant self, but his slider has gotten a lot better,” Reds manager Bryan Price said. “It’s a pitch that he’s worked on for a long time. It seems like that pitch has really turned a corner and got him some big outs today.”

Bailey (1-1) struck out eight while allowing six hits and three walks. He came into the game with 8.16 ERA after signing a big extension in the offseason with Cincinnati.

Zack Cozart hit a two-run homer for Cincinnati, which took two of three this weekend from the Cubs and has won 17 of 19 games at Wrigley Field.

The Reds have won 10 straight when Bailey faces the Cubs. He is 7-0 in his last 10 outings against Chicago and 5-0 in his past six at Wrigley Field.

The Reds are averaging 6 1/2 runs a game in Bailey’ starts.

“It seems like every time I take the mound the bats show up. I’m just glad I was finally able to help them out,” said Bailey.

The Cubs have lost six of seven.

Carlos Villanueva (1-4) was tagged for five runs and nine hits in 4 2-3 innings.

With two outs in the fourth, Devin Mesoraco and Cozart hit back-to-back RBI doubles to take a 2-0 lead. Mesoraco has a hit in all nine games he’s played this season and leads the team in RBIs with 11. He missed the first week of the season with a strained oblique. Later in the inning, Bailey helped himself with an RBI single to extend the lead to 3-0.

“Both times we’re in trouble with two outs and it’s the big leagues, you’ve got to put them away,” Villanueva said. “When you give a team like that, an offensive team, a chance to throw a couple runs on the board they’ll take advantage of it.”

“Little League, rec ball, whatever it is. This is definitely the hottest I’ve ever been,” Mesoraco said.

Todd Frazier added an RBI double and Ryan Ludwick a run-scoring single off Villanueva in the fifth inning.

Villanueva wasn’t much better than his previous start at St. Louis. He gave up a career-high nine runs over three-plus innings in a 10-4 loss to St. Louis.

“It might seem like my (pitches) flattened out. I didn’t really feel tired, but, you know, obviously the stuff wasn’t as crisp,” said Villanueva. “I thought I had good stuff, a lot better plan today (than my last start). Just, you know, one pitch away those two innings, you know, two outs you got to be able to (finish).”

The Cubs didn’t score until the seventh, getting a pair of RBI singles from Ryan Sweeney and Nate Schierholtz off reliever Manny Parra. Parra was lifted with one out and the bases loaded. Sam LeCure entered and got Welington Castillo to ground into a double play.

NOTES: Ludwick was back in the lineup after missing Saturday’s game with a bruised left big toe sustained when he fouled a pitch off his foot on Friday. Price said Ludwick was held out because of concerns about his ability to run and cut defensively. … Reds RHP Mike Leake (2-1, 2.95) is scheduled to face Pirates LHP Francisco Liriano (0-3, 3.96) to open a four-game series in Pittsburgh on Monday at 7:05 p.m. … The Cubs kick off a four-game home series against Arizona on Monday at 7:05 p.m. with LHP Travis Wood (0-2, 3.00) scheduled to start against RHP Bronson Arroyo (1-1, 9.95). … Villanueva struck out seven.

COLUMBUS (AP) — Not so long ago, the Columbus Blue Jackets were the worst team in the NHL. Now they’re... read more