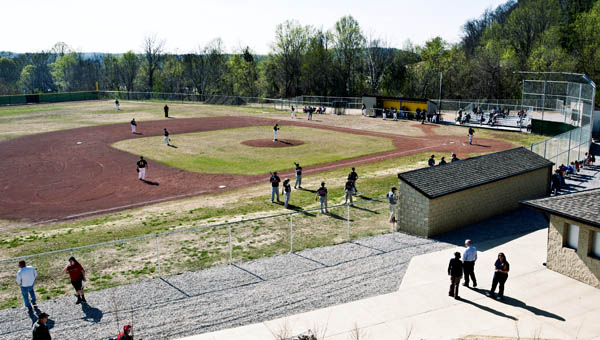 SOUTH POINT — In the movie “Field of Dreams” when Kevin Costner heard a voice tell him, “If “you build it, they will come” the disembodied voice was saying the fans of baseball would come.

When South Point High School started constructing an on-campus baseball/softball complex it came with a host of problems.

“The issues really started because we changed the topography of the land,” Mark Christian, South Point Schools Superintendent said, “which changed the way the water ran off the hills.”

The water runoff combined with a sandy sediment led to some major erosion issues. All these problems caused the contracting company to quit construction on the field.

“Everything just kept getting washed out,” Christian said. “That caused our first contractor to up and quit on us. It was just a big ordeal trying to find a new contractor and move forward with the field’s construction.”

New plans were drawn up to combat the erosion, which included a new drainage system to better direct the water runoff.

“Once the construction got back underway we had to install a new drainage system,” Christian said. “We created a drain similar to a bowl that would catch the water so it didn’t run over the edge and cause more erosion.”

As the start of the 2014 season crept closer, parents and players began to wonder if these issues would keep the field from being ready.

“We were getting really nervous that we weren’t going to be able to play on it this year,” said Melinda Boggs. “My son was told as a freshman before his class graduated he would have a new field to play on. He’s a senior now and it didn’t look like that was going to happen.”

Christian and the South Point school board didn’t want that to happen, so they got in touch with some local people to get all the work left on the field finished.

“We were really lucky to have so much skilled labor here in the county,” Christian said. “So many locals stepped up. Enyart Construction gave us a good deal on gravel, and put in one of the drains. Dave Fitzpatrick poured the concrete pads for the bleachers. Pete Newman did all the fencing around the field. We also had some design help from E.L. Robinson and Patrick Leighty, and with all the work the parents did as well it was a community effort.”

The Pointers were finally able to break in the new field earlier this month with the baseball team christening the complex with an 18-0 win over the Tolsia Rebels.

“Being able to play that first game was so awesome,” Boggs said. “It has just given the boys and the girls more confidence because they have a nice place to play. It’s obvious in how they’re playing they’re proud of it.”

A few improvements such as lights are already planned for the field at a later time.

“Lights are the next thing on the list I guess,” Boggs said. “But I told my son, Brandon all that I wanted was a home run on the new field. He hasn’t got that yet, but he did throw a perfect game this year so I can’t complain too much.”

Guilty plea made in felony