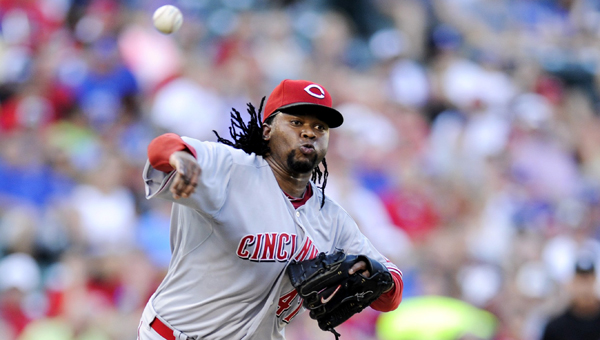 PITTSBURGH (AP) — Johnny Cueto hasn’t forgotten about his mini-meltdown against the Pittsburgh Pirates in the NL wild-card game last fall.

He certainly didn’t expect the long-suffering fans in Pittsburgh to hit the erase button either.

So when the slow, disjointed chants of “Cue-to, Cue-to” rang out when the Cincinnati Reds ace took the mound on Tuesday night, the right-hander just smiled and went to work.

“I had to laugh when I heard that,” Cueto said. “They didn’t forget. The fans have a job to do, too. It’s their job to try to help their team out but it didn’t bother me.”

Not in the slightest.

Keeping the Pirates guessing all night, Cueto tossed his second three-hitter against the Pittsburgh in a week and the Cincinnati Reds eased past the struggling Pirates 4-1 on Tuesday night.

He struck out four and walked three while running his career-long scoreless streak to 21 innings before giving up a home run to Andrew McCutchen with one out in the ninth.

Cueto (2-2) improved to 15-4 in his career against the Pirates and became the first Cincinnati pitcher to toss consecutive complete games since Mat Latos did it in June 2012.

“Johnny was great, he pitched a great game,” Reds catcher Brayan Pena said. “He pitched them differently this time and he had them off balance. Back-to-back complete games is pretty good. That doesn’t happen too often.”

Pena and Zack Cozart had consecutive RBI hits off Edinson Volquez (1-1) in the seventh to provide all the offense Cueto needed.

Volquez allowed two runs and five hits with a walk and three strikeouts.

Getting the best of his good friend who is attempting to resurrect his career in Pittsburgh wasn’t easy for Cueto, who played with Volquez in Cincinnati from 2008-11.

The scene wasn’t nearly as electric as Cueto’s previous appearance at PNC Park, when the Cincinnati ace was pushed around early in a 6-2 loss in the National League wild-card game.

At one point Cueto dropped the ball while standing on the mound then immediately gave up a home run to Russell Martin as the standing room-only crowd lustily roared the pitcher’s last name. He lasted just 4 1-3 innings that night as the Pirates won their first postseason game in 21 years.

Six months later, the chants would be half-hearted at best.

Cueto never lost his grip on the ball, or the game.

Working quickly against a team he has dominated throughout his career, Cueto needed 117 pitches to get 27 outs and nearly became the first Cincinnati pitcher to post back-to-back shutouts since Hall of Famer Tom Seaver did it in 1977 before McCutchen’s home run into the second row of seats in right field in the ninth.

The Reds have won 6 of 9 after stumbling out of the gate while the Pirates have dropped 9 of 12.

Cueto upped his record to 9-2 at PNC Park, where the Pirates appear to be no closer to solving him now than they were when they first faced him in 2009.

“He’s learned how to pitch, he’s a great competitor and he doesn’t give in to anyone,” Cincinnati manager Bryan Price said. “For a guy who doesn’t look like a world-class athlete, he sure plays the game like one.”

Jay Bruce and Todd Frazier led off with consecutive singles in the seventh and Bruce trotted home one out later when Pena laced a shot to right field. The burly catcher was ruled out at second on review while trying to stretch a single into a double, but Cozart followed with a sharp double to left to make it 2-0.

Cincinnati added insurance runs in the eighth and ninth, with Cueto providing the eighth RBI of his career with a single to right off reliever Stolmy Pimentel.

NOTES: Cincinnati RHP Mat Latos still has not thrown since being scratched from a rehab start on April 8 due to inflammation in his right elbow. Cincinnati manager Bryan Price said Latos is “feeling better” and could begin playing catch before the end of the week. … The series continues on Wednesday. Alfredo Simon (2-1, 0.86 ERA) starts for the Reds against Pittsburgh’s Charlie Morton (0-2, 4.32).

Jim Walker jim.walker@irontontribune.com   CHESAPEAKE — Patience is a virtue. It’s also a key element toward being a good hitter.... read more