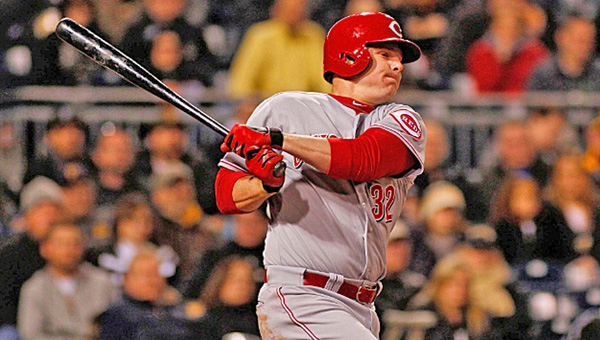 Cincinnati outfielder Jay Bruce had two hits and drove in the decisive run as the Reds beat the Pittsburgh Pirates 5-2 on Wednesday and gave Alfredo Simon his third win. (Photo Courtesy of The Cincinnati Reds)

PITTSBURGH (AP) — It looked like Alfredo Simon’s bubble was about to burst.

After being one of the biggest surprises of the young season for the Cincinnati Reds by ably filling in for injured starting pitcher Mat Latos, Simon hit a rough patch in the first inning Wednesday night. He walked three batters in a row to force in a run.

Then, just like that, the right-hander went back to being dominant, pitching into the seventh inning despite the erratic early control, and Jay Bruce drove in a run for a fifth consecutive game as the Reds beat the Pittsburgh Pirates 5-2.

“It was cold and I was having a hard time feeling the ball,” said Simon, pitching on a blustery night when the game-time temperature was 50 degrees. “After that first inning, I felt a lot better and pitched like I’ve been pitching.

Simon (3-1) worked 6 2-3 innings and allowed two runs on four hits and five walks while striking out four. Simon has pitched at least six innings in each of his four starts this season as a replacement for the injured Mat Latos and has a 1.30 ERA. Simon pitched exclusively in relief the previous two years.

“He’s been terrific,” Reds manager Bryan Price said. “He’s been an extremely versatile pitcher for us the last two-plus seasons. He’s always been a talented guy, but he’s really found himself and made himself into a very good-looking starting pitcher.”

Bruce had two hits and knocked in the final run of the decisive three-run fifth inning against Charlie Morton (0-3) that gave the Reds a 4-2 lead. Billy Hamilton also had two hits for Cincinnati, which stole four bases while winning seven of 10 games since a 3-7 start.

“We took advantage of what we could because this is team that might not give you a lot most nights,” Bruce said. “We tried to put some pressure on the defense.”

Jonathan Broxton pitched a scoreless ninth inning, despite allowing two hits, for his third save.

Andrew McCutchen had two hits and homered for the third consecutive night for the Pirates, who lost for the 10th time in 13 games.

“I was yanking my fastball all night,” he said. “There were times were I was trying to go inside on left-handed hitters and missing in the right-handed batter’s box. I was literally missing by 3 feet.”

The Reds used their speed to go ahead in a fifth inning that included two stolen bases and the second throwing error of the game by catcher Chris Stewart.

NOTES: Pittsburgh C Russell Martin was a late scratch because of a miscommunication. Martin, who is 0-for-7 against Simon, thought he was getting Wednesday off while manager Clint Hurdle thought he and Martin had decided Thursday would be an off day. … Reds LHP Aroldis Chapman threw early batting practice, the first time he had faced hitters since suffering fractures of his eye and nose along with a mild concussion March 19 when he was hit by a line drive off the bat of Kansas City’s Salvador Perez. Chapman pitched from behind a protective screen and the next step is for him to throw batting practice without the screen sometime this weekend when the Reds visit Atlanta. … Cincinnati INF/OF Skip Schumaker will report to the Reds’ extended spring training camp on Friday at Goodyear, Ariz., as he continues to rehab the left shoulder he dislocated while diving for a ball in the outfield during a spring training game March 21. … Pittsburgh 1B Travis Ishikawa cleared waivers and elected free agency after declining an outright assignment to Triple-A Indianapolis. He was designated for assignment last Friday. … The Pirates will recall RHP Brandon Cumpton from Indianapolis to start Thursday against LHP Tony Cingrani (1-2, 3.22) in the finale of the four-game series.

Jim Walker jim.walker@irontontribune.com   SOUTH POINT — Pitching is always the key, but doing the little things was the key.... read more