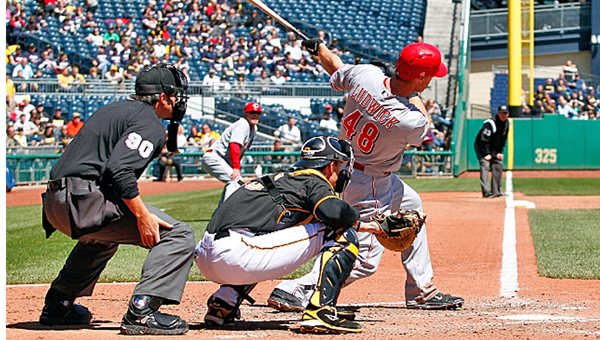 Cincinnati’s Ryan Ludwick (48) connects for a two-run double in the sixth inning as the Reds beat the Pittsburgh Pirates 2-1 on Thursday. (Photo Courtesy of The Cincinnati Reds)

PITTSBURGH (AP) — Getting to .500 certainly is not the ultimate goal for a franchise that has been to the postseason in three of the last four seasons.

Considering the Cincinnati Reds started the year at 3-8, however, they were happy to get their record to 11-11 on Thursday.

Ryan Ludwick lined a two-run double after two batters were hit by pitches, lifting Tony Cingrani and the Reds over the Pittsburgh Pirates 2-1.

The Reds won for the seventh time in nine games.

“Three series wins in a row, back to .500,” Ludwick said. “The pitching was outstanding. Pitching wins championships and those guys did an outstanding job. If we keep getting pitching like that, we’re going to be back in this thing in a hurry.”

The Pirates have lost six of seven, scoring a total of 22 runs in that span.

Cingrani (2-2) allowed one run and six hits in six innings. He struck out seven and walked two.

Logan Ondrusek, Sam LeCure and Jonathan Broxton pitched one scoreless inning each in relief of Cingrani. Broxton recorded his fourth save.

“Certainly a great series here,” Reds manager Bryan Price said. “We had to battle — they pitched us tough, as they always do. They’ve got a good squad, and some way we found a way to grind out three victories here. I’m really proud of the boys.”

Ludwick’s double in the sixth drove in Joey Votto and Todd Frazier. Both of them were plunked by rookie Brandon Cumpton (0-1), promoted from Triple-A earlier in the day.

“It was great because we were starting to get a little irritated because we had three hit batters in the game and a couple of our guys got squared up pretty good,” Price said.

“I don’t think there was any intent to it, but the fact his two-run double followed the third hit by pitch had a little bit more sweetness to it for sure,” he said.

Cumpton gave up just two runs in seven innings while taking the rotation spot of lefty Wandy Rodriguez, put on the disabled list Monday with inflammation in his left knee.

Cumpton held the Reds to four hits while walking one and striking out five, but also hit three batters. He had a string of 20 consecutive scoreless innings in the major leagues, dating to last season, until Ludwick snapped it.

“I was feeling good, trying to attack guys and be aggressive,” Cumpton said. “Unfortunately, I let a couple of pitches get away.”

Ludwick had two of the Reds’ five hits. Neil Walker got two of Pittsburgh’s seven hits.

The Pirates scored in the first inning when Pedro Alvarez singled in Walker, who had drawn a walk. Pittsburgh left eight runners on base as it fell a season-worst five games under .500 at 9-14 a year after both making the postseason and having a winning record for the first time since 1992.

“We can’t worry about where we are right now,” Pirates center fielder Andrew McCutchen said. “We know we’re going to be better. We’re going to learn as a team and keep pushing forward.”

“It’s having a trust in one another, having each other’s backs. We’ve just to keep working on things.”

NOTES: Reds CF Billy Hamilton was caught stealing as a pinch runner. He didn’t start, and Price said he wants to give the rookie leadoff hitter some regular mental breaks throughout the season. … Pittsburgh C Russell Martin did not start for a second straight game with what manager Clint Hurdle said after the game was “lower body soreness.” … Cincinnati opens a three-game series Friday night against the Braves at Atlanta with RHP Homer Bailey 1-1, 5.75) facing RHP Ervin Santana (2-0, 0.86). … The Pirates begin a three-game series Friday at St. Louis against the Cardinals with RHP Gerrit Cole (2-1, 3.67) matching up against RHP Shelby Miller (1-2, 3.57).