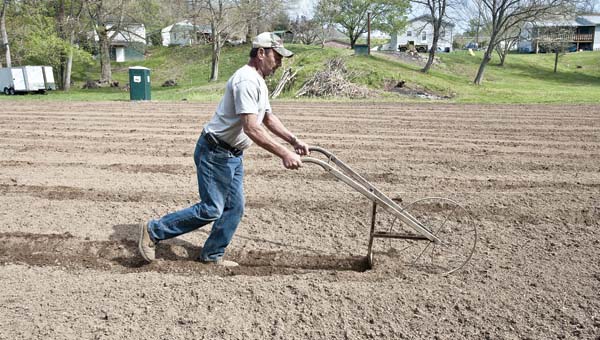 The agency uses the work farm as a place for probationers to serve out their community service sentences. The various crops produced at the farm feed inmates at the jail and the juvenile detention center, and people at the Chesapeake Community Center and the Ironton City Mission.

“The benefits of this farm are two fold,” said, Dennis Gibson probation officer. “People who have community service time that they need to serve can come here and do that time while learning about growing and managing crops. Then of course the harvested crops help cut down on food cost at the jail and detention center.”

Potatoes were planted Thursday and Friday, while other crops will be planted in the coming weeks. The APD also has a work farm in Rock Hill, and between the two locations, can produce over 1,000 pounds of food.

“We usually produce a pretty good harvest,” Gibson said. “Last year was one of our better years but I’m hoping this year we can improve on that. Once you get everything planted you kind of get excited to see how it’s going to turn out.”

Most of the crops planted won’t be ready for harvest until the end of September or beginning of October Gibson said.