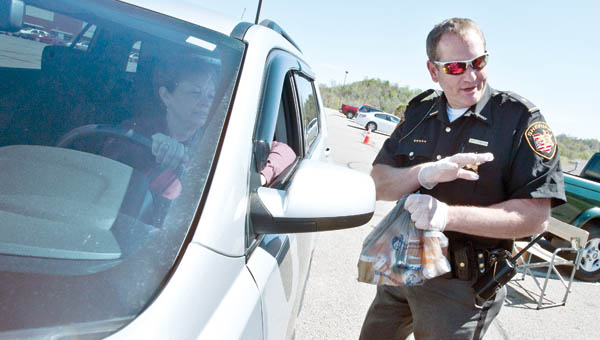 Sheriff Jeff Lawless talks to a visitor Saturday during the annual Drug Take Back day in Ironton. The event is sponsored by the Lawrence-Scioto Solid Waste Management District and the Lawrence County Sheriff’s Office.

Within the first half-hour 12 cars had pulled up to the tent at Ironton Hills to participate in the sixth Drug Take Back, sponsored by the Lawrence County Sheriff’s Office and the Lawrence-Scioto Solid Waste District.

By the time the four-hour event was over, a record number of items had been received — 60 pounds of pills, 37 pounds of sharps and 52 vehicles.

“We are having a great turnout,” Lawless said. “It is all age groups.”

The 12 cars equaled 12 pounds of prescription medicines ranging from tramadol to hydrocodone. Also collected were needles and syringes.

“We already have one container full of sharps,” Palmer said at that time.

Containers were provided by the Ironton Urgent Care Center of Our Lady of Bellefonte Hospital.

“Everybody is pleased with the convenience of the drive through,” Lawless said. “You can drive up and hand over the medicines and then drive away.”

All prescription bottles were emptied into a larger container, which will be taken to a Portsmouth location and incinerated, along with needles. The pill bottles will be burned locally.