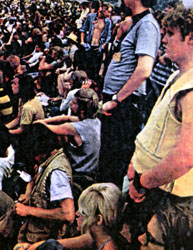 Submitted
Dr. Charles Jarrett, far right, appears in a photo in Life Magazine that was taken at Woodstock in 1969.

In August 1969, a group of four friends piled in a Volkswagen Bug and left Columbus for a sleepy farm town in upstate New York.

Charles Jarrett and his friend, Rob Harris, thought they were just appeasing their lady friends by taking them to an arts and crafts fair in Bethel, N.Y. Instead, for $6, they stumbled onto the most famous music festival in American history.

“We really had no idea what Woodstock was,” Jarrett said. “We thought we were going to an art fair. I thought there was going to be macramé, and tie-dye, things like that. We got there and realized all the roads were blocked and we couldn’t go any farther. There isn’t anyone taking tickets and we saw these people walking over this hill and we followed them.”

As the Volkswagen started over the hill a sea of people appeared to the four occupants inside. Continuing to follow the stream of people that fed into the larger body, Jarrett and his friends decided to park the small car to the left of the stage.

“The amount of people was unbelievable,” Jarrett said. “We took a tarp that was in the trunk and stretched it over to this fence and pretty much hung out by our vehicle most of the time. Because, it was physically difficult to get up to where the stage was. You had to just go through so many people and it was up hill and seemed like miles away.”

“That was a lot of fun,” Jarrett said. “To watch the bands fly in on the helicopters. That was probably one of the highlights to me, watching people come off those choppers. Like Jefferson Airplane and Jimi Hendrix, we saw them flown into the stage.”

Many of the artists like Hendrix were already household names by the time they performed at Woodstock. However, others such as Joe Cocker and Carlos Santana cemented themselves as music icons by playing the event.

“Santana was just getting started and no one had ever heard those Latin rhythms like that before,” Jarrett said. “When people heard the introduction to Cocker’s ‘A Little Help From My Friends’ they just went running toward the stage it was just magnetizing. Then of course you have Crosby, Stills and Nash and that was the first time they ever played live together. After Woodstock of course they all became infinitely more famous.”

At the time of Woodstock, Jarrett was a young man playing in band called the Mojos using music to try and pay his way through college. Now, Jarrett holds a doctorate in rural sociology and is a psychology instructor at Ohio University Southern. He often uses the festival as a teaching point in his classes focusing on the cultural and historical significance of the event.

“It was a tremendous influence on my generation, the baby boomers,” Jarrett said. “Just like the flyers said, this was a festival of love, peace and happiness. For three days all of these people came together. For the most part everyone was pretty civil, it was half a million people peacefully coexisting on this relatively little piece of property with very little food and water.”

Woodstock is often marred by drug use and sexual promiscuity, which overshadows the ideals of freedom and liberation that the festival embodied according to Jarrett.

“For my generation it was a statement,” Jarrett said. “A statement that this is the kind of world we wanted to create. Obviously, we failed and that didn’t happen. When I think of the world today, versus then? The world today is much more dangerous. But, what we did do for those three days I think went a long way toward the civil rights movement.

“It went a long way toward accepting people for who they are. This is where we start getting into the lessons that I would teach in my race relations class. Whenever you get into talking about the rights of minorities, women, or in today’s world the rights of gays and lesbians I think that’s what Woodstock really went a long way toward making happen.”

No matter the significance of Woodstock, the festival is still characterized most by the music.

“That was the glue,” Jarrett said. “It held everything together. Music has this ability to speak to people and put people on a natural high. I think that was really what pushed forward the ideas of freedom and liberty for everyone, was the common ground of music. When you can find something that you have in common with other people suddenly your differences become miniscule.”

Recently, Jarrett put on a Woodstock reenactment in the Mains Rotunda at OUS. He, along with Phil Osborne, Catherine Cirner and Barry Gillum played songs by Hendrix, Janis Joplin, Credence Clearwater Revival and other musicians who performed at the 1969 festival.

“It was a lot of fun, and my students enjoyed it,” a laughing Jarrett said. “The biggest difference between our reenactment and the real thing was we had plenty of food and I didn’t have to take a bath in a pond. I went into a pond there at the festival and I came out dirtier than when I went in.”

It has been nearly 45 years since Jarrett and his friends made the trek to upstate New York for an “art fair.” That weekend still stands out as an unforgettable event in the life of those who attended and a point of interest for many more who didn’t.

“If you were there it’s simply something you won’t forget,” Jarrett said. “Lots of people say that they were there. But, I have the pictures from Life Magazine to prove that I was there. For some people the event is still about hippies and the negative imagery that comes with that. But, for others it’s something that they want to recreate, recapture. That’s exactly what every music festival since has tried to do, recapture the magic of Woodstock.”

People for The Point join in first cleanup