People for The Point join in first cleanup 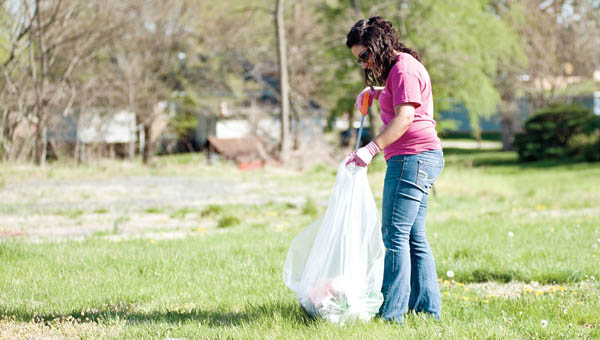 SOUTH POINT —No beer bottle, pop can or fast food sandwich wrapper was going to elude Mary Cogan as she scrambled up the bank to the railroad tracks above South Point Park on Saturday morning.

Cogan was joining in on the first cleanup of the newly formed beautification organization for her hometown — People for The Point — that targeted the city park and the riverfront area about a block away.

“It’s not part of the park, but it still needs to be cleaned up,” she said about the tracks.

In less than a half an hour, she had already filled one oversized trash bag and was starting on her second.

The organization, formed in the fall of 2013, is dedicated to keeping the South Point area as free from litter as it can, planning three cleanups a year.

“There are a lot of areas that need attention,” Chris Smith, president of People, said as he took a break from weed-eating at the riverfront park. “All along the tracks and at the entrances of the village. With the village’s limited budget, this helps out. Plus, it gets the kids involved and gets them to take ownership and take pride in their community. This is home.”

The organization, made up entirely of concerned volunteers, meets monthly to plan cleanups and its first community event — Party in the Park on July 5.

The all-day celebration will start with a “Run, White and Blue” powder run at 9 a.m. followed by entertainment by local bands with featured act, Ricky Huckaby. Concessions will be sold throughout the day.

“We are encouraging civic groups, churches, Little Leagues to get involved,” Smith said.

They can sell food items as a fundraiser or set up informational booths about themselves.

“C3 church is donating inflatables,” Smith said. “It will be a party in the park.”

The organization is always looking for new members and donations, whether cash or equipment. On Saturday volunteers brought their own lawn mowers and weed eaters but would like the group to have its own stash of equipment.

The next cleanup is set for May 10 and Smith can be contacted about any donations at chrissmith@zoominternet.net.

“This is going to benefit our children and community,” Cogan said. “We all need to volunteer. The cleaner it is other people will feel this and try hard to keep it clean.

“You have to give back, give back with your heart and make it a better place.”

Issue 1 up for renewal

On May 6, voters in Lawrence County, as well as every other county in Ohio, will vote on whether to... read more