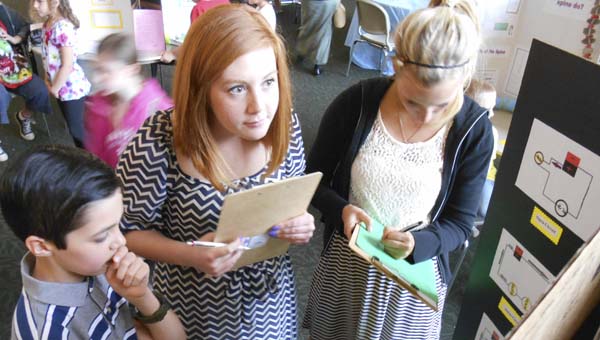 Science projects may be commonplace for most students, but rarely do home-schooled children get to display their projects for everyone to see.

Rebecca Vissing, a senior technology and applied science major at Ohio University Southern, coordinated the 2014 Home-school Science Fair as her graduating project. She also has four children — three boys and a girl — who are all home-schooled. Vissing planned the fair for educational and social purposes for home-schooled students and their parents.

“There are so many home-school groups around here,” Vissing said. “There’s one in Ashland (Kentucky) that I didn’t even know about, and I live in Ashland. So I thought that by everyone coming together in the same place we could spread the word about groups in the area and get to know one another.”

The fair was also a chance for home-school students to show off their knowledge of science.

Levi Vissing, 6, and his brothers, Jackson and Aydan, each had projects in the fair.

Levi’s project was titled, What Does a Spine Do?

“I chose to do my project on a spine because I wanted to see what it does,” he said.

Several project topics were chosen simply as a result of children’s natural curiosity.

Gabby Karle, 6, of Barboursville, W.Va., had a project called Salt in the Ocean.

“I just wondered why there is salt in the ocean,” she said. “So I looked it up. I’m scared of the ocean because of sharks.”

Gabby’s brother, 4-year-old Max, also had a project in the fair titled Shoot Like the NBA Stars that detailed the way the NBA’s best players shoot a basketball.

Brandi Williams, of South Point, had a daughter, Allison, 8, and a son, Nathanial, 5, with science projects on display.

“It gives them a chance to socialize and show what they know,” Williams said. “These are not only their project topics; they learned everything they could about the subjects.”

Allison’s project was From Seedling to Flower and Nathanial’s was Fossil Discoveries.

Kayleigh Edwards, 9, said she has a friend who lives in Arizona who comes to visit sometimes and she noticed something that piqued her interest. Her project was titled Black and White Bodies and detailed the correlation between skin tone and geography.

“I always wondered why her skin was darker than mine,” Edwards said. “So I thought it would be cool to let other people know how it happens.”