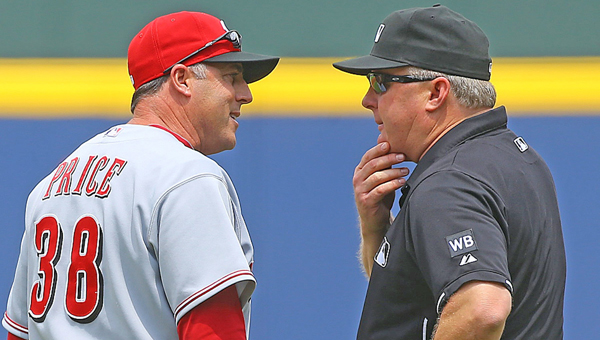 Cincinnati Reds manager Bryan Price is ejected from the game by second base umpire Bill Miller, after arguing a first base call following a review, in the first inning against the Atlanta Braves at Turner Field in Atlanta Sunday. The Braves defeated the Reds in 10 innings, 1-0. (MCT Direct Photo)

CINCINNATI (AP) — The Reds are asking for more information from Major League Baseball about the replay dispute that led to Bryan Price’s first ejection as manager.

Price was ejected during the first inning of Cincinnati’s 1-0 loss in 10 innings at Atlanta on Sunday. Price asked for a replay after B.J. Upton was called safe at first base on Johnny Cueto’s pickoff throw. First baseman Joey Votto caught the ball and swiped at Upton’s hand before it touched the base.

The replay was deemed inconclusive and the call stood. Price came out to discuss it further and was ejected immediately.

The Reds sought clarification from MLB on Monday about why the replay was deemed inconclusive. Price thought that the replay definitively showed that Upton was out.

“That was not explained,” Price said before the start of a series against the Chicago Cubs. “They had the one angle that everybody saw at the ballpark which was the only angle we saw, the one I thought supported our argument, which apparently it did not.”

It was Price’s first ejection as a manager and only his third in the majors. He said his last ejection was in 2004 as the pitching coach with Seattle. He was ejected for arguing ball-and-strike calls from the dugout.

“Now you can’t go out and discuss anything with an umpire or else you’ll be ejected,” Price said. “You have no opportunity to talk to the umpires to see if anyone saw it differently. So that to me is somewhat challenging.”

CINCINNATI (AP) — The Reds lost a game to the weather — a recurring problem this season — and took... read more