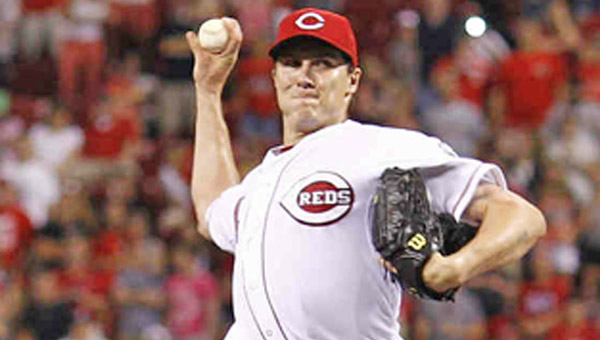 Cincinnati pitcher Homer Bailey threw a season-high eight innings to get the win as the Reds beat Milwaukee 8-3 on Thursday. (MCT Direct Photos)

CINCINNATI (AP) — Brayan Pena only wanted to spark a rally. He wound up deciding the game.

The Reds hit three homers in all as they pulled within 6 1/2 games of the NL Central leaders.

Tucker Barnhart led off the fifth with his first career homer. Todd Frazier added a two-run drive in the sixth off Marco Estrada, who gave up six hits and four walks in six innings.

Pena had homered during a 9-4 loss to the Chicago Cubs on Wednesday night. He batted for Bailey with the score tied at 3 in the eighth and connected on the first pitch from Jim Henderson (2-1) for a two-run homer.

“I was just thinking about driving the ball and hitting it hard somewhere,” Pena said. “He got a pitch up and I was able to take advantage of it. I wasn’t expecting a homer, but I’ll take it.”

Cincinnati sent 11 batters to the plate while scoring five times during the inning against a bullpen that entered the series with the fourth-best ERA in the league. It had one very bad inning.

Homer Bailey (2-2) allowed eight hits in a season-high eight innings, finally returning to form after missing much of spring training with a strained groin.

“This game was good for all of us,” Bailey said. “We’re fixing to turn things around. We’ve had a lot happen already this year. This one showed we’re starting to come together as a group.”

Milwaukee has lost back-to-back games for only the second time this season. The Brewers haven’t dropped more than two in a row.

Cincinnati opened the four-game series with another injury. Leadoff hitter Billy Hamilton sprained knuckles on his left hand while making a diving catch in center field and will miss a few games.

Hamilton stretched all out to reach Carlos Gomez’s line drive that opened the game. He grimaced and flexed his left hand and wrist as he got up. Chris Heisey hit for him in the bottom of the inning.

Hamilton hurt the middle finger on his left hand while sliding into base during the opening week of the season and missed two games.

“Unfortunately, it’s the same hand that he hurt in New York,” manager Bryan Price said. “We’re optimistic that he’ll only miss a day or two, but we won’t know for a day or two.”

Gomez stole a hit from Joey Votto in the bottom of the first, catching his fly at the top of the wall in center. Votto pointed two fingers toward Gomez, who also stole a potential go-ahead homer from him for the final out in Milwaukee’s 4-3 win last July 8.

Jean Segura singled in a run in the second, and Gomez doubled home a pair of two-out runs to tie it 3-all in the seventh.

Milwaukee got two players back in the lineup, but outfielder Ryan Braun missed his fifth game because of a strained oblique. Braun is expected back this weekend.

Segura returned at shortstop after being out of the starting lineup for four games because of an injury to his face. Third baseman Aramis Ramirez was back after missing two games with a sore left elbow and went hitless, extending his slump to 0 for 25.

Outfielder Logan Schafer is eligible to return from the disabled list on Saturday, recovered from a strained right hamstring. For now, Roenicke is using Mark Reynolds in right field, a position the infielder played during spring training.

NOTES: RHP Wily Peralta (3-1) faces RHP Mike Leake (2-2) in the second game of the series. … The Brewers called reliever Rob Wooten. Milwaukee’s bullpen has thrown the fifth-most innings in the majors. Utility player Elian Herrera was optioned to Triple-A. … The Reds put LHP Tony Cingrani on the DL with a sore pitching shoulder. Reliever Curtis Partch was called up from Triple-A. … Closer Aroldis Chapman made his first rehab appearance, throwing one inning and fanning two batters at Class A Dayton. He’s recovering from a line drive off the forehead on March 19. He could be activated by the end of next week.

CINCINNATI (AP) — The Reds put left-hander Tony Cingrani on the 15-day disabled list because of soreness in his pitching... read more