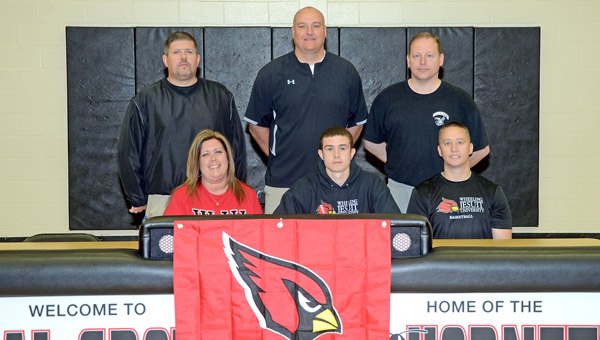 COAL GROVE — In 1966, the Academy Award for best motion picture went to “A Man For All Seasons” about St. Thomas More.

If Hollywood does a remake, movie producers might want to cast Coal Grove Hornets’ senior Conor Markins in the lead role.

However, they just might have to change the name of the movie to “A Player For All Seasons.”

Markins — who played five sports his senior and junior years — settled on one season at the college level as he signed a letter-of-intent to play basketball with the Wheeling Jesuit University Cardinals on Friday.

“Basketball was definitely my favorite. I enjoy playing it more than any of them,” said Markins. “But honestly, all the sports I enjoyed playing a lot because I just like being around my friends all the time.

Markins was an All-Ohio Valley Conference player in football and basketball. He was also first team all-district in both sports and special mention All-Ohio.

He was a member of the golf team and he plays baseball and runs track during the spring.

“It definitely wore on me. There were times when I wished I wouldn’t have played so many, but the key that really helped me take a step as a basketball player was playing football and running track,” said Markins.

“My sophomore year I was just a 5-10, 185-pound 3-point shooter and I couldn’t put the ball on the floor or drive, but I went out and played football and dropped about 25 pounds and I got a lot stronger, a lot faster and a lot more athletic.

“I think that’s what made me take the next step as a basketball player. I mean, I couldn’t guard a soul or run and jump as a sophomore. Now that’s some of my best attributes. I guess they all go together. Every sport, if you think of it the right way and use it the right way, helps each other.”

He said the Cardinal coaches plan to use him as either a point guard or a shooting guard or both.

“I’d rather play the two because that’s what I grew up playing.”

Ohio Wesleyan, Alderson-Broaddus, Marietta were the other main schools whop pursued Markins, but he settled on Wheeling Jesuit for a variety of reasons.

“I really liked Wheeling’s campus and they fit my style of play. The coaches really seemed like straight-up guys and I knew that if I deserved to play I would,” said Markins.

Coal Grove head coach Jay Lucas said Markins is not only one of the best players he’s coached, but one of the hardest workers.

“Conor grew so much over the three years that I coached him, not only as a basketball player but as an athlete,” said Hornets’ head coach Jay Lucas.

“Today is just a culmination of a kid who had a dream and went out and achieved the dream. Nobody deserves it more than he does in my opinion.

Markins plans to major in history with a minor in education with plans to teach and coach.

“First of all, I want to be successful in school. That’s the reason I’m going there. That’s what I’m most excited for,” said Markins.

“But playing ball-wise, I want to play next year, but I’m not going in there expecting to play 30 minutes a game. I’m going to be realistic about it. Over the summer I’m going to work my tail off and really get after it and hopefully when I get up there I can earn a spot and play a couple of minutes a game and help the team however I can.”

Conor is the son of Noel Smith and Brad Markins.