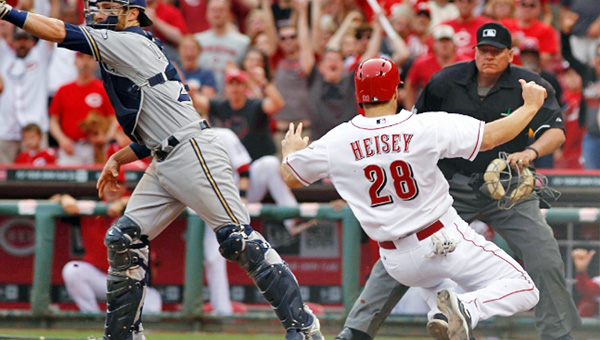 Cincinnati’s Chris Heisey (28) scores the winning run in the 10th inning on Todd Frazier’s double as the Reds beat the Milwaukee Brewers, 4-3, on Sunday. (Photo Courtesy of The Cincinnati Reds.com)

CINCINNATI (AP) — Todd Frazier got a second opportunity and made the most of it.

Chris Heisey scored from first base on Frazier’s 10th-inning double into the left-field corner, and the Cincinnati Reds rallied to beat the Milwaukee Brewers 4-3 Sunday.

Frazier’s soft line drive resulted in an inning-ending double play in sixth, when the Reds had loaded the bases against Kyle Lohse.

“Fortunately, I got another chance,” Frazier said. “The best thing about baseball is you get another chance tomorrow. This time, I only wanted three innings.”

Heisey drew a two-out, four-pitch walk from Tyler Thornburgh (3-1), and Frazier followed with a line drive that one-hopped the wall. Heisey beat shortstop Jean Segura’s off-target relay to the plate to give the Reds three wins in their four-game series against the team with the majors’ best record at 21-11.

“Heisey grinded out a walk and then had to bust it,” Cincinnati manager Bryan Price said. “They played the ball perfectly.”

Third base coach Steve Smith had been criticized by some for having runners thrown out at home several times this season.

“I’m not known for my eagle eye at the plate. The key is not to get caught up in the moment and swing at bad pitches” said Heisey, who was inserted into the starting lineup when Jay Bruce was scratched with a sore left knee. “Any time the ball is down the line or in the gap, I’m thinking of scoring.”

Brandon Phillips greeted reliever Brandon Kintzler with a tying 425-foot homer to center with one out in the eighth, Phillips’ second homer this season and first since April 5.

“It was a weird outing for me,” Lohse said. “They did a good job mixing it up. At first, they were super aggressive. I tried to use that, and they starting taking. They made me work for the outs that I got.”

Cincinnati starter Alfredo Simon, who hadn’t allowed more than two runs in any of his first five starts, gave up three in seven innings, along with five hits.

Scooter Gennett hit Simon’s third pitch of the game 357 feet into the right-field seats for his second homer of this season. The Brewers made it 2-0 in the third on Jonathan Lucroy’s two-out, RBI single.

Pena hit the first pitch of the third inning 456 feet over the right-field wall for his third homer of the season, all in the last five days. He left for a pinch runner with a tight hamstring in the seventh.

Khris Davis restored the two-run lead with a solo homer in the fourth. Cincinnati again made it a one-run game in the bottom half on Frazier’s sacrifice fly after Phillips led off with a double — his fourth hit in five at-bats since getting Friday off.

Milwaukee had been 4-0 in extra-inning games and 4-0 in one-run games.

“We need to send a message that we’re in this thing and we have to prove it to ourselves,” Price said after the Reds improved to 15-16. “Being around .500 isn’t what we’re all about.”

NOTES: Davis has 15 home runs in his two-year big league career, including five against the Reds. … Price expects LHP Aroldis Chapman to be activated for the Reds’ homestand that is scheduled to start Friday. Chapman is due to take Sunday and Monday off before starting and pitching an inning for Triple-A Louisville on Tuesday. He is to throw an inning of relief on Wednesday. Chapman is coming back from surgery to repair injuries to his left eye sustained when he was struck by a line drive during a spring training game on March 19.