Hall plans to be ready for Bengals’ camp 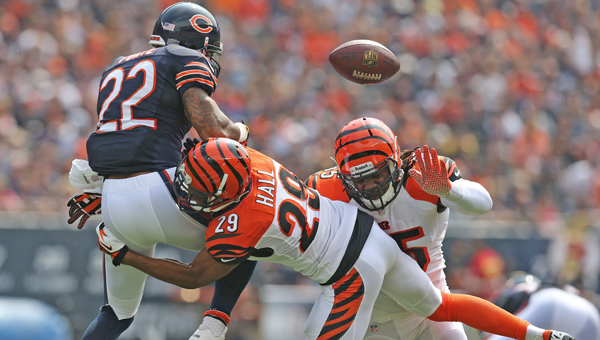 CINCINNATI (AP) — Bengals’ cornerback Leon Hall is happy with his recovery from a torn Achilles tendon and expects to be ready for the start of training camp in July.

Hall joined Bengals teammates for a voluntary workout on Monday. He’s running on schedule and expects to be ready for the season. Cincinnati holds its first training camp practice on July 23.

“What can I do? I can do it all, actually,” Hall said. “I feel comfortable pretty much doing anything, whether it’s straight ahead, lateral type stuff, jumping, landing. I think I’m pretty good to go with almost everything.”

The 29-year-old cornerback is going through a familiar comeback. He has torn both of his Achilles tendons in the last three years.

The Bengals’ top cornerback tore his left one during a game on Dec. 13, 2011, but made it back for the start of training camp the next year. He started 14 games in 2012 and played up to form despite the injury.

Last year, he tore his right Achilles tendon on Oct. 20 at Detroit. He’s following a similar schedule for the latest rehabilitation, which is going a little more smoothly than the first one.

“It’s easier in that sense, just as far as I’ve been through it,” Hall said. “I know if something is going wrong on a certain day that it’s not the end of the world. It’s not going to affect me negatively in the long run.

“Sometimes it’ll be more sore than on other days, a little more tender or whatnot. I used to get a little discouraged (during the first rehab), but now it is what it is. Just keep working, go past it. The soreness will go away and I’ll keep working.”

The Bengals’ defense finished third in the league last season but likely will be a focus in the draft this week.

Defensive end Michael Johnson left as a free agent, signing with Tampa Bay. Johnson was a disruptive pass rusher who got the team’s franchise label in 2013. Defensive tackle Geno Atkins is recovering from a torn knee ligament and it’s unclear when he’ll be ready to return.

“We’re really going to miss Michael Johnson,” defensive tackle Domata Peko said. “He brought a lot to the table as far as leadership and excellent play. But that’s what the name of the game is, next man up. We’ve got a lot of good defensive ends here.”

The Bengals also have questions at cornerback.

Terence Newman and Adam “Pacman” Jones turn 36 and 31 this year, respectively. Dre Kirkpatrick has struggled with injuries and inconsistency since the Bengals took him in the first round in 2012. Kirkpatrick appeared in 14 games last season, starting three.

Hall won’t be watching to see if the Bengals take any cornerbacks in the draft this week. The first round will be held on Thursday night.

Hall doesn’t pay much attention to the draft, which was stretched out over three days and moved from April to May this year.

“I used to when I first got here, and not just to see if they got cornerbacks,” he said. “I just liked to watch. Now, I don’t know, it’s just so long. It’s kind of like a spectacle. I’m kind of over it to be honest. I don’t really watch it anymore.”