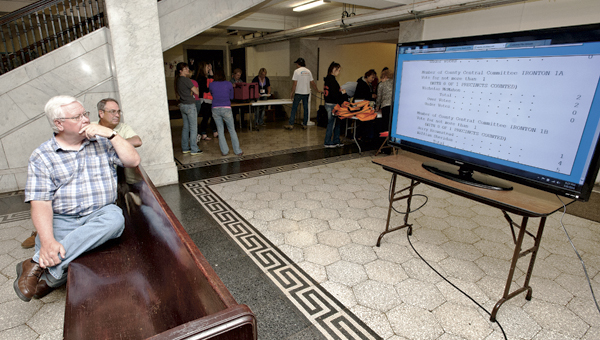 Commissioner Freddie Hayes got over the first hurdle to retaining his seat for the next four years. In the Republican primary on Tuesday Hayes beat challenger, Wayne Taylor, 2,444 to 1,659 or by an almost 20 percent margin in the unofficial results.

“I feel great,” Hayes said. “I am very excited and appreciate all the supporters who supported me. We are going to get out and work hard in the fall and win the general to continue to be a voice for the people.”

This was Hayes’s second election since being appointed to the commission in the spring of 2012 following the death of Paul Herrell. Hayes had to run in November to fill Herrell’s unexpired term, beating former commissioner Doug Malone.

This election Hayes’ opposition was Herrell’s son-in-law. This was the first bid for Taylor, an electronic engineer, for a countywide office

Both men ran on the platform of cutting the Union-Rome sewer rates and getting a new jail. However, Hayes favored possibly moving the facility to Franklin Furnace while Taylor opposed the jail leaving Lawrence County.

From the start with absentee votes and 12 of the 84 precinct in Hayes was in the lead by a two to one margin. As the votes came in, that margin was reduced slightly but Taylor never took over the lead.

In one of the lowest turnouts in recent county election history, 5,961 came out to the polls or 12.4 percent of the 48,044 registered voters in the county. Of that 4,190 were Republican and 1,737 were Democrats. There were 1,510 who voted absentee. Of that 334 were Democrats, 1,168 were Republican, two were libertarians and six were non-partisan.

“It is terribly low but quite frankly more than we expected,” Mark McCown, of the board of elections, said. “In each of the major parties for countywide offices, you only had one really contested race and that was for county commissioners. We would have hoped to have a much greater turnout. Oftentimes it doesn’t generate excitement or the appeal people want.”

On the Democratic side Tim Edwards, an Ironton businessman, stopped Tanner Heaberlin in his second bid to get elected to the commission. Edwards pulled 944 votes to Heaberlin’s 691 in unofficial results.

“First I want to thank Tanner Heaberlin who just ran a clean race,” Edwards said. “He never said a bad word. I appreciate that. I want to thank the voters of Lawrence County for giving me an opportunity and showing some faith in me and my friends and family who worked unbelievable hard. I think our chances are very good in the fall. I definitely think we have a shot. I look at the numbers from the polls. It may be time for a change in Lawrence County. I think it is an opportunity.”

Heaberlin, a South Point teacher, was appointed to the commission in 2007 following the death of George Patterson. However, he was beaten in the 2008 general election by current Commission President Les Boggs.

Instead of running on a platform of issues, Edwards said he wanted to promote what the voters wanted, instead of his own agenda. Heaberlin said the top issues were jobs, moving the jail to Franklin Furnace and promoting transparency in government.

That race was always closer than the Hayes-Taylor contest with Edwards getting 294 to Heaberlin’s 199 when the first votes were count. But like the Republican race, Edwards as the original frontrunner never lost his lead.

Now Hayes and Edwards will square off in November in a general election where the top posts in the state are up including governor and attorney general.

Lawrence County residents voted in favor of a public works program that funds upgrades to roads, bridges and other local... read more