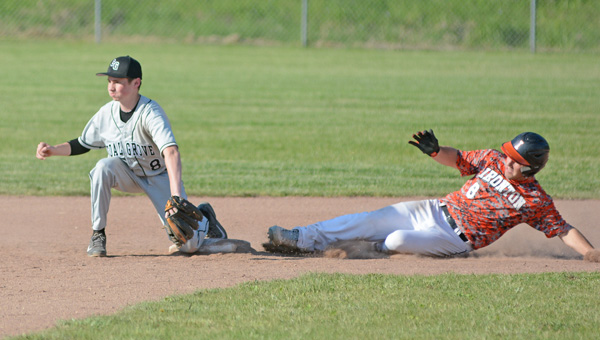 It sounds simple: Put the bat on the ball.

What sounds simple proved difficult against Coal Grove’s Daniel Rutheford who struck out 11 in the Hornets 6-3 come-from-behind win over the Ironton Fighting Tigers Wednesday.

“We have to go back and work on our two-strike approach at the plate,” said Ironton coach Larry Goodwin.

Rutherford didn’t walk a batter and gave up five hits in the complete game win.

Luke Diamond pitched well in defeat. He struck out five and walked three.

Ironton (4-14) broke the scoreless tie with two runs in the second inning.

With one out, Lucas Campbell was hit by a pitch, Hunter Weber doubled and Dane Wilson had a two-run single.

The Fighting Tigers made it 3-0 in the third when Trevor Easterling reached on an error, Luke Kelly put down a sacrifice and Diamond doubled him home.

The Hornets (11-6) took the lead with a five-run fourth inning.

Jesse Rigsby was hit by a pitch, Conor Markins singled, Travis Carey had an RBI single and D.J. Miller delivered a two-run single.

Miller moved up on a passed ball, Dylan Malone singled and Miller scored on another passed ball. Malone scored on a sacrifice fly by Jacob Clark.

Ironton threatened in the bottom of the inning when Tanner Price singled, stole second, went to third on a passed ball but was left stranded as Rutherford struck out the next three batters.

Coal Grove added an insurance run in the sixth when Miller was hit by a pitch and Malone and Luke McGraw singled.

“One thing is for certain, we will keep working and remain positive,” said Goodwin.