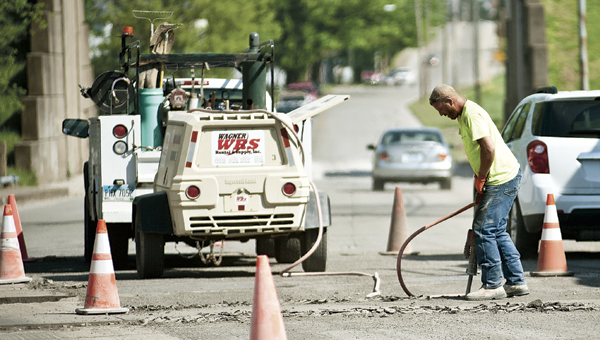 THE TRIBUNE/JESSICA ST JAMES
Steve Lemay, with Allard Construction, uses a jackhammer Tuesday on North Second Street at the floodwall while traffic passes by.

An area of Second Street in Ironton officials say has been a paving nightmare in the past was again fixed on Wednesday.

Ironton Mayor Rich Blankenship said for as long as he can remember the section of Second Street where the floodgate attaches to the road has been a nuisance to travelers.

“The area where the floodgate connects to the ground has always been a problem,” Blankenship said. “We are milling up the existing pavement today (Tuesday) and paving it on Wednesday. It should be much better than it was before.”

“There’s a lot of traffic through there but hopefully that stretch of road won’t be so bad now,” he said. “It’s a problem so often because the plates in the ground hold water and we have trouble getting anything to stay down because it’s always wet.”

The project was completed on Wednesday.