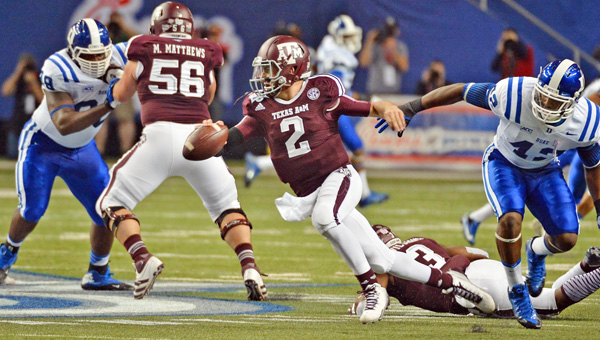 Texas A&M quarterback Johnny Manziel (2) was taken in the first round by the Cleveland Browns with the No. 22 pick. (MCT Direct Photo)

Johnny Manziel, college football’s most entertaining player with the reputation for pulling off magical plays, was selected with the No. 22 overall pick in the NFL draft on Thursday night by the Cleveland Browns, who hope they have finally found their franchise quarterback.

Manziel sat patiently in the wings at Radio City Music Hall, waiting nearly three hours for his name to be called as everyone from Green Bay quarterback Aaron Rodgers to the league’s official Twitter account tweeted about him squirming in his chair backstage.

Then the Browns, who made two earlier trades, made another one with Philadelphia and selected the polarizing and electrifying 6-footer.

Manziel walked onto the stage to meet Commissioner Roger Goodell and rubbed his fingers together, a signature “money” gesture that endeared him to some fans and annoyed others.

In Cleveland, some Browns backers celebrated Manziel’s selection like the team had just won the Super Bowl. Of course, the Browns have never even made it to the NFL’s showcase event and haven’t won a title since 1964 — a golden anniversary that will arrive in December. But Manziel brings hope to a city that has witnessed little but losing since the Browns returned as an expansion team in 1999.

Manziel now must back up the hype around him.

“The team obviously wants to win and wants to win now,” Manziel said on a conference call. “I’ve been a winner everywhere I’ve been. I’m ready to work extremely hard. “

Manziel’s size scared away some teams, but he believes his playmaking skills translate to the pro game.

“I’m used to that by now,” Manziel said. “I’ve been scrutinized and nitpicked. I’ve proven it from my first year to my next and I always get better.”

Manziel is expected to compete with starter Brian Hoyer, who showed promise last season before suffering a knee injury.

Manziel brings an instantaneous buzz and national relevance to the Browns, who have made the playoffs just once since 1999 and have lost at least 11 games in each of the past six seasons. Cleveland is on its third coach in three years, but Mike Pettine is inheriting a team with potential and five Pro Bowlers on its roster.

And now, he’s got Manziel — and the circus that will come along with him.

The Browns have to hope the No. 22 pick doesn’t haunt them again. That’s the pick they also used on quarterback Brady Quinn, whose first-round slide in 2007 was similar to Manziel’s drop, and they also drafted Brandon Weeden two years ago. He was released in March.

There’s no doubt Manziel will help sell tickets and his jersey will be coveted by every young Cleveland fan. But what remains to be seen is if he can win.

Earlier, as Manziel waited, the Browns made two trades and selected Oklahoma State cornerback Justin Gilbert with the No. 8 pick.

With the first deal of the draft, the Browns moved down five spots and acquired Buffalo’s No. 9 pick and first- and fourth-round picks next year. Cleveland then swapped picks with Minnesota, acquiring a fifth-rounder before taking Gilbert, who they plan to play on the opposite side of Pro Bowler Joe Haden.

“He’s long. He’s fast. He’s explosive. He’s a playmaker,” general manager Ray Farmer said of Gilbert. “He’s got great arm length. He’s got the speed. He’s got the ball skills. I know some people have questioned his tackling. We cover like Browns, tackling was good, but it doesn’t necessarily need to be great.”

Gilbert scoffed at critics who say he’s a weak tackler.

“I’ve heard it before,” he said. “It’s something that doesn’t bother me at all because I know I can tackle.”

Gilbert wasn’t sure the Browns were that interested in him until he was getting ready to head to New York.

“It’s a dream come true,” Gilbert said in a conference call. “I became friends with him (Haden) not too long ago and he’s a great guy and I’m looking forward to playing with him.”

“I pretty much can do it all,” Gilbert said. “I’m an all-around cornerback.”

Cleveland entered the most important draft in its expansion era with 10 picks, ample ammunition for Farmer, promoted when president Joe Banner and GM Michael Lombardi were fired in February, to add talent and depth to a team that went 4-12 last season and fired coach Rob Chudzinski.

During the winter, the Browns, who entered the draft with five of the first 83 picks, did an exhaustive study on quarterbacks with Louisville’s Teddy Bridgewater reportedly emerging as the top candidate.

In the end, Manziel was their man.