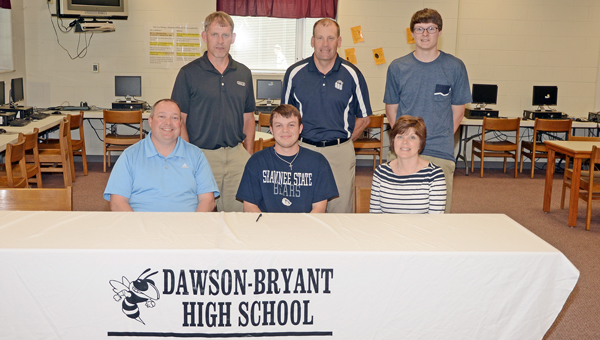 COAL GROVE — Luke McGraw is trying to make golf easier. In fact, with work he wants to make it as easy as his decision where to play at the college level.

His decision was to play for the Shawnee State University Bears.

“It was the easiest decision,” said McGraw. “It was close and coach (Roger Merb’s) program looks to be building and we’re going to have fun with it.

“It really caught my eye. I can stay close to home and have a lot of fun with what we’re doing.”

Shawnee State assistant coach David Hopkins said McGraw is a welcomed addition to the program both on and off the golf course.

“He’ll go to class. We don’t have to worry about that. We’re happy to have him,” said Hopkins.

“From watching his time as a freshman through now that he’s a senior, you could see every year score-wise he got better and better. His work ethic is great. He wants to be good.”

Hard work is something that McGraw plans to make part of his daily routine. In fact, he is all ready working toward his freshman year with the Bears.

“It’s going to take a ton of work. I’m going to have to work my tail off to get to where I want to be,” said McGraw.

“But that’s what makes golf fun, working really hard hard. My game has been OK this summer. I’ve played a few times and I’m really enjoying it.”

McGraw will join a team that includes another local golfer in sophomore Josh Zornes who played at Ironton. Hopkins said McGraw will benefit from Zornes’ experience and presence on the team.

“(Luke) has got some good role models around here. He get to work with Josh Zornes who is the most hard-working player I’ve been around,” said Hopkins.

“We want this young kids to come in and follow what Josh has done for us the last two year.

“We’re heading in the right direction. Luke is the sixth kid we’ve brought in this year for next year. Our numbers are getting better and I think we’re getting better players. Things are looking good for us and Luke will fit right in with our guys. We think he’ll get a chance to play for us right away and that’s key for him.”

McGraw — who is leaning toward a major in physical therapy — is the son of Ron and Linda McGraw of Ironton.

BEREA (AP) — From war-torn Haiti to Missouri to Cleveland. Pierre Desir’s path to the NFL is a one-of-a-kind journey.... read more