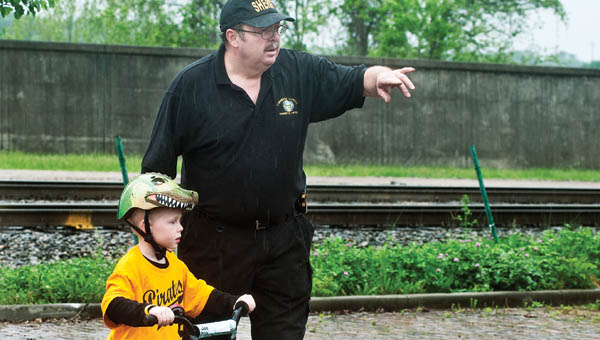 Sheriff’s Deputy Ray Jones was putting 5-year-old Jack Lambert through his paces Saturday morning at the inaugural bike rodeo at The Depot.

“How do you signal how to turn?” he asked. “You put your hand straight out.”

Jack followed directions to a T.

Jack rode his bike perfectly through the obstacle course. Now it was off to take the pledge administrated by Deputy Julia Jones that he would always obey the safety rules of bike riding. Then Jack was officially a graduate of this year’s safety bike rodeo.

Watching on the sidelines was Jack’s father, Daron Lambert.

“He was really excited to come here,” Lambert said. “He couldn’t stop talking about it.”

Despite the drizzly day, the rodeo attracted a number of youngsters to the event sponsored by the Lawrence County Sheriff’s Office, the Ironton Health Department, the Ironton City Police and the Ohio Chapter of the American Academy of Pediatrics.

Before each child took a turn at the obstacle course, he or she was fitted with a new bike helmet.

“I think that is fantastic for kids to get a free helmet,” Lori Deer said as her daughter Peyton Deer, 8, and friend Kaeli Huff, 8, did their turn at the obstacle course.

Nearby the rain was affecting the Ironton In Bloom’s Mother’s Day planting event where children could be given a flower pot they could plant petunias or marigolds in and then decorate it.

“There are not nearly as many as we had hoped,” Pati Payne of the Ironton Artists Association, said. Payne was overseeing the project.

However, the annual May IIB plant sale was faring better.

“We are selling quite a bit, considering the rain,” Jane Laber said.