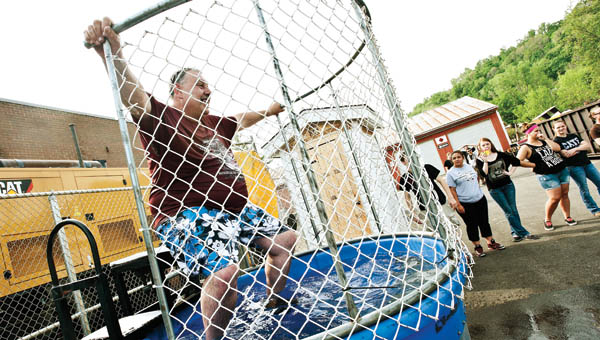 Charlie Hammonds participates in the dunking booth event during the Relay for Life event at Collins Career Center Friday.

The school held its second straight Relay For Life fundraiser that involved a rotation of students and teachers making a loop around the school.

“Someone is always walking on our makeshift track,” Billy Roberts, co-chair for the event and a graphic design instructor at the school, said. “It’s a beautiful metaphor. The whole point of this is to raise awareness against cancer. The fight against cancer is constant and so is the walking on the track.”

While some students and teachers were taking their turns on the walk, the others were participating in goods and activity booths stationed along the track. Students, for a donation, could buy refreshments like slushies and sodas or purchase a chance to “pie a teacher” or dunk an administrator in the dunking booth.

“Each individual program came up with their own angle,” James Woda, the events co-chair and social studies teacher, said. “They had their own fundraiser ideas for their booths. It’s been neat to see what they came up with and to see the strategies they have used to get people to spend money at their booth.”

Friday’s event was a culmination of three months of fundraising efforts by the school’s students. During that time the students had raised more than $1,000 for Relay For Life and were hoping that Friday’s efforts would help get them to the ultimate goal of $4,000 before the upcoming countywide relay.

“For the last three months or so we’ve been hitting the fundraising hard,” Woda said. “It’s been a pretty cool deal. Today is just kind of a wind down to all of that. It gives the kids a break, but still gives them a chance to make a little more toward the goal. It’s just a wonderful cause and we’re happy to be apart of it.”

Relay For Life is a national organization that uses local events throughout the country to raise money for cancer awareness and research. Roberts and Woda said it was a worthy cause that CCC’s students needed to take part in.

“Any time you can raise money for a cause like this that’s a good thing,” Roberts said. “Cancer touches everybody. We have all been affected by it in some way. So it’s good for our students to understand that, and see that they can do something to make a difference.”

The far reach of the disease also has a way of bringing people of different backgrounds together through shared experiences and a common goal.

“We have students that come from so many different backgrounds,” Woda said. “They’ve all had an experience with cancer, maybe not directly but through a family member or friend. It’s been amazing to see during this event all those backgrounds come together and work toward the same goal. To fight cancer.”

CCC was one of several schools throughout the county to participate in “mini” relay events. The school that raised the most money for Relay For Life will be recognize with the “Spirit Award” during the countywide relay on May 17 and 18 at the Lawrence County fairgrounds.