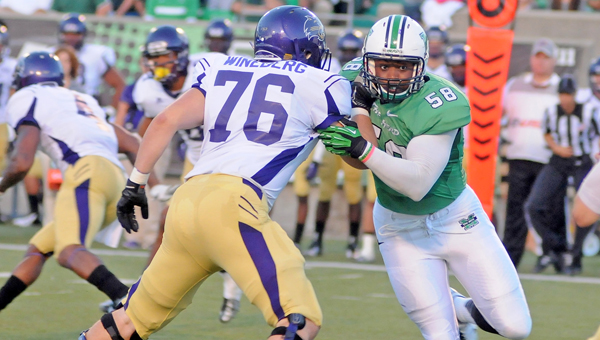 HUNTINGTON, W.Va. — Jeremiah Taylor’s senior season was difficult because a back injury kept him from playing in all but three games.

But some of that disappointment was erased Saturday night after the regular seven-round NFL draft when he was invited to the Baltimore Ravens’ rookie minicamp for a tryout.

The 6-foot-4, 253-pound Taylor was able to return to the field for the Military Bowl and the Herd’s win over Maryland.

As a junior and team captain, Taylor had 54 tackles, 8.5 tackles for a loss and 5.5 sacks. He was again a team captain for his senior season but was sidelined early in the year with the back injury.

Taylor was a two-way standout for the South Point Pointers during his high school career under coach Dan McDavid.

Marshall had three other players get an opportunity to play at the next level.

Offensive lineman Garrett Scott was selected in the sixth round by the Super Bowl champion Seattle Seahawks.

Scott is the 39th Marshall player to ever be drafted dating by to Everette Elkins in 1939.

CINCINNATI (AP) — Aroldis Chapman let baseball know in his own way that his long journey back from an scary... read more