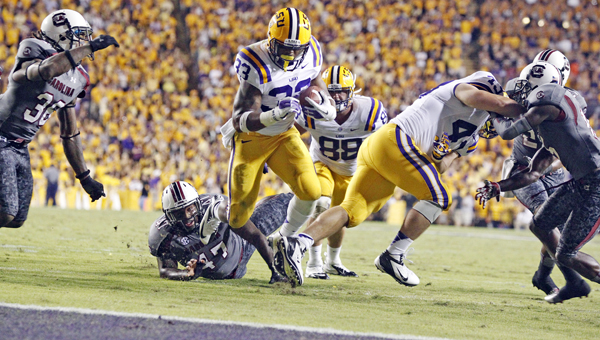 CINCINNATI (AP) — LSU’s Jeremy Hill watches other running backs and knows their value, even as they become a lesser commodity in the NFL draft.

For the second year in a row, nobody took a running back during the first round of the draft last week. That hadn’t happened since the NFL and AFL merged in 1967.

It’s also an indication of how the position is changing.

“I don’t think the position is devalued,” Hill said. “There’s just general managers out there that know what they’re doing as far as drafting at the position. And if you can get great value lower in the draft, obviously they’re going to do that.

In the last few years, a trend in college has filtered up to the NFL. Schools rely so much on fast-tempo, spread offenses that the quarterbacks, receivers and pass-blocking offensive linemen get the most attention. Running backs often get overlooked in the wide-open schemes.

And they’re dropping to the second round of the NFL draft now, too.

“A little of it speaks to the game in college football right now,” coach Marvin Lewis said. “There’s an emphasis on guys playing wideout.”

Teams are trying to keep up with the fast-paced scoring by getting linemen who can pass block and receivers who can turn a short completion into a quick score. It shows in the numbers:

— NFL games averaged 46.8 points last season, the most in league history. The 697 net yards on average per game also set a record.

— Quarterbacks set NFL season record for average passer rating (86) and touchdown passes (804). There was an average of 471.2 net yards passing, another all-time high.

— There were 24 times that someone threw for 400 yards in a game, shattering the previous league record of 18.

The Bengals’ choices at running back each of the last two drafts also reflect a change in how the position is viewed.

They used to feature a more straight-ahead approach with Cedric Benson and BenJarvus Green-Ellis, who has led the team in rushing each of the last two seasons. Green-Ellis caught 22 passes for only 104 yards in 2012, his first season in Cincinnati replacing Benson.

Wanting more from the position in their West Coast offense, they drafted Giovani Bernard in the second round last year. He shared the spot with Green-Ellis, carried 170 times for 695 yards (4.1 average) and caught 56 passes for 514 yards and three touchdowns. By comparison, Green-Ellis ran for 756 yards (3.4 average per carry) and caught only four passes for 22 yards last season.

The Bengals think Hill can take Green-Ellis’ spot and give them a power runner who is also a receiving option and could stay in the game on passing downs, making the offense more diversified.

“He’s not Giovani Bernard — we’re not going to ask him to be that — but at the end of the day, he has the ability to catch the ball,” offensive coordinator Hue Jackson said. “And that’s what I meant about being a three-down player.”

The question is how long it will take him to take over the job from Green-Ellis. Asked if there’s room for both of them on the roster, Jackson said, “Right now there is. Right now that’s not my concern.”